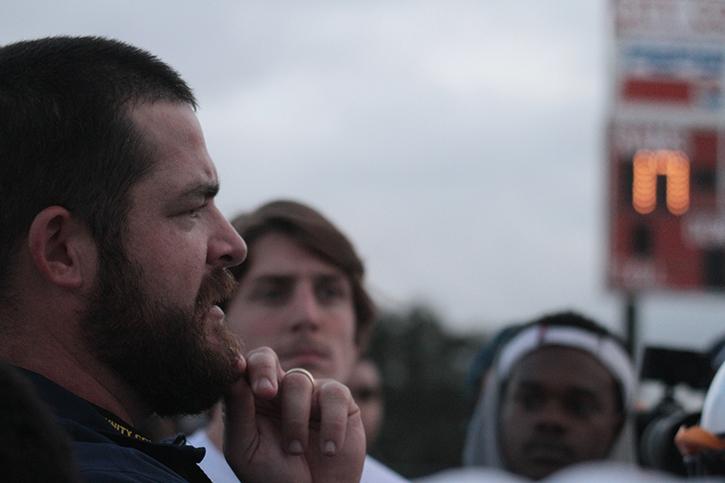 Despite a number of breaks going their way, the American River College Beavers lost to City College of San Francisco 17-14 in the NorCal championship game Saturday, in a heavyweight defensive punchout of a game that featured every form of drama that football can offer.

CCSF missed two field goals in the game, but made the one that mattered. It was a 41 yard attempt that sailed through the uprights, giving the Rams a three point lead with only six seconds left for ARC to respond.

ARC running back and kick returner Wadus Parker was tackled at ARC’s 20 yard line just as the sixth second ticked off and the game expired. CCSF stormed the field in jubilation while ARC players deflated.

In his postgame speech to the team, head coach Jon Osterhout, whose first season as head coach also ended on Saturday, expressed regret for not having a better plan on the kickoff return.

His first point, however, was that no matter the outcome, the journey left him proud of his team.

“At the end of the day, we just didn’t have enough time, and didn’t make enough plays … I’m proud of every one of you guys,” said Osterhout to the solemn crowd of players surrounding him.

Safety Damion Sanders had an interception and recovered a fumble 90 yards for a touchdown in the game, but felt he left something on the field.

“I felt like I could have made a couple more plays,” Sanders said.

Sanders, who along with Robert Sanders, Malcolm Scott and Kameron Williams makes up a terrific secondary for ARC, was nothing but complimentary to the entire team, despite the offense’s struggles.

“All of my brothers on this team played balls to the walls,” said Sanders.

Osterhout accounted the low output of the offense more to CCSF’s defense than any failings by his team.

“They’re a very good defensive unit. Very well coached, stout up front. We knew it was going to be difficult to move the ball, but it’s a full team game, offense, defense and special teams … at the end of the day, we didn’t execute in all three phases,” said Osterhout.

New faces means a new scheme for this year’s squad

ARC football no longer undefeated after losing to Butte in mistake-filled game, 31-28