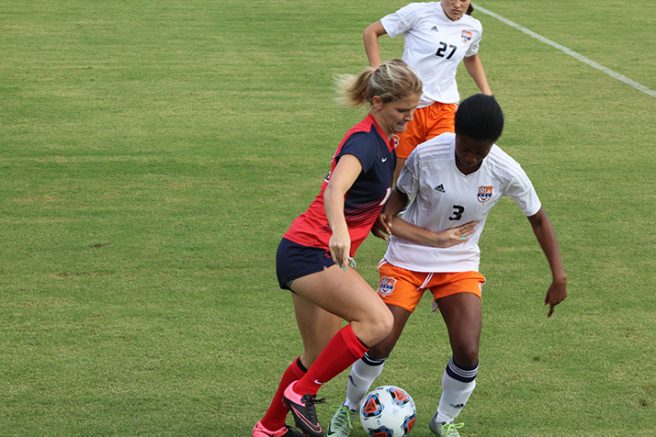 American River College’s new soccer stadium did not receive the welcome that ARC would have liked in its first game.

The women’s soccer team finished the stadium opener with a man down and a 2-0 loss to Cosumnes River College on Friday.

The Beavers allowed an early goal as CRC midfielder Anna Ottley played the ball into teammate Lauren Azevedo whose shot from distance bounced off goalkeeper Sylvia Flood’s hands and into the net to give the Hawks a 1-0 lead.

With ARC on the back foot early on, they were forced to find shots and create chances to get a goal back, but were unable to find a way through before halftime.

Coming out off the break, Cosumnes River took a defensive approach to the game in order to preserve their lead, and allowed ARC to try their luck going forward. 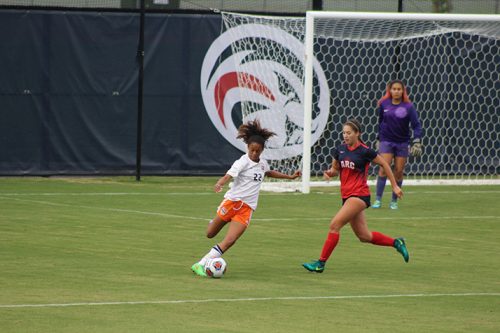 Cosumnes River College defender Averen Calvin attempts to cross the ball into a teammate while being chased by an ARC defender during a game on Oct. 28, 2016. ARC lost 2-0. (Photo by Mack Ervin III)

However things got harder for ARC as in the 51st minute, defender Kahyla Ingman was shown a straight red card for a tackle on a CRC player that was deemed to be a denial of a goal scoring opportunity.

With only ten players on the pitch, the Beavers carried on, still searching for a chance to get back into the game.

With under 30 minutes remaining, CRC forward Andrea Story crossed the ball in for teammate Averen Calvin, who volleyed the ball into the back of the net to extend their lead to 2-0.

The Beavers were unable to grab a goal back despite chances late in the game, and they suffered their third straight loss.

The loss leaves ARC with a 4-12-2 with just four games remaining on the season.

“We need to focus on tightening up our play,” Arellanes said. “Mistakes that aren’t that difficult. We don’t read the game very well and it’s something we need to get better and improve at.”

After suffering another loss on Tuesday to Sierra, ARC’s next game will be on Friday at San Joaquin Delta College.