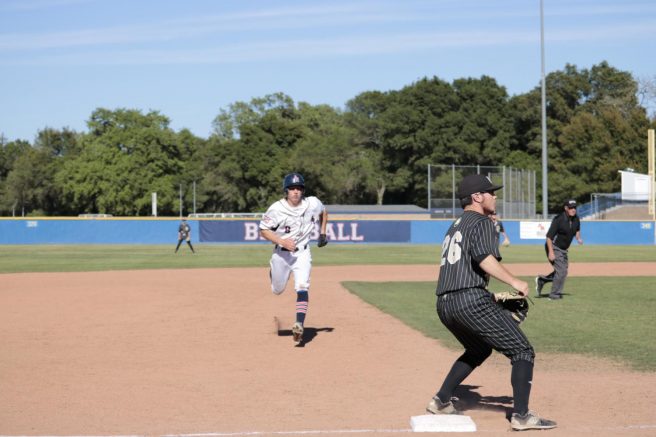 The American River College baseball team suffered its third consecutive loss, 11-2 to San Joaquin Delta College on April 12. According to players and coaches there are some areas that the team should improve on for future games.

ARC started off with a good defensive front, but failed to keep the score until the first half of the game. San Joaquin Delta scored only three runs while ARC did not score.

“It didn’t end too well, but all who were pitching … [played] pretty good,” Josephson said.

Outfielder Ian McIsaac is a welding technology major who says he knows that the team made some errors.

“Overall, the Beavers battled defensively to minimize Delta’s runs early in the game but a few walks and errors, later in the game, allowed them to hit in a few runs, leading to Delta’s high scoring innings,” McIsaac said.

ARC head coach Doug Jumelet, and assistant coach Dillon Bowers tried to keep the moral of players high by applauding the players during the game.

“I walked too many people today [and] I left behind on too many counts that is why I got in trouble,” Josephson said.

According to Josephson, San Joaquin Delta got four runs in the last inning, which gave them some extra cushion in the game.

Outfielder Gideon Branch said he wasn’t happy after the game. Branch said there were too many mistakes on pitching in and heading but assures they’ll do well in the team’s remaining games.

“The game was pretty rough,” Bowers said. “We struggled a little bit, I thought the starting pitch went well on the mount but [ultimately it wasn’t] good.”

Bowers says one of the reasons that they failed was a weak defense.

“In [future] games we [have to] play better defense, we need to be able (to) score some more runs,” Bowers said.

The game was the third consecutive game that ARC lost to San Joaquin Delta in the series. However, according to Bowers, he accepts ARC’s mistakes on defense, which they would try to control better in future games.

“With two more series to go, we plan (to) fight and compete to win till the last out of the season,” McIsaac said.

Be the first to comment on "ARC baseball falls to San Joaquin Delta, 11-2"