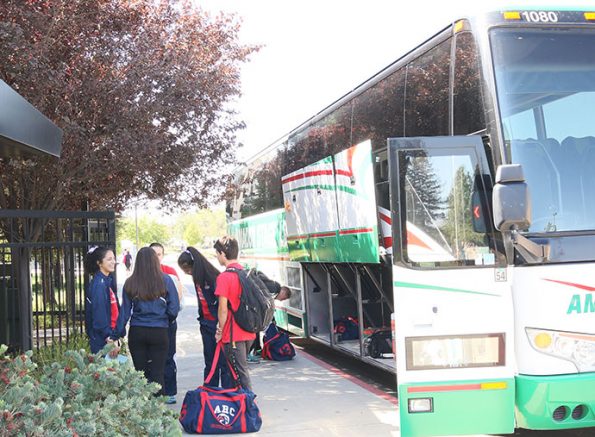 A group of ARC cross country runners waiting outside of their travel bus for their race at the racecourse, Lou Vasquez, in Golden Gate Park, San Francisco on Sept. 22. (Photo by Cheyenne Drury)

The Lou Vasquez course is one of the flattest and fastest courses for NorCal teams with weather that averages around 71 degrees.

“Overall I felt the race went really well, it was a fast course and I felt great. I am very happy with my results,” Archuleta said after the race.

Not only is this course flat and fast but it is shorter in distance than other courses on the schedule.. A traditional 5k is 3.1 miles.

The men had four of their runners finish in the top ten.

Sophomore Ozzie Hansen finished second for his team with a time of 20 minutes, 44.4 seconds, while fellow Sophomore Conor Wells finished finished fifth with a 21 minutes, 6.04 seconds.

That means between the two top finishers for the men there was less than an eight second gap.

Between fifth, seventh and ninth place there was also less than a three second gap.

The day before the race coach for the men, Rick Anderson said,”We were about a minute apart at Fresno which is way too much for us. It should be, you know, thirty seconds from our first to our fifth guy, otherwise there are way too many bodies in between and the score just starts to decline.”

At this meet the men picked it up and between their first and fifth finishers. There was less than a thirty second gap.

Lou Vasquez has proven to be a stride in the right direction for both the men and women and both coaches seem confident and happy with their teams performances.

“I thought the guys ran very well, said Anderson, “The guys ran a strong second half at which time they made a big move and reeled in the leaders.”

“Aryana Archuleta led her beavers team to the win and she (gave) us a spectacular performance, very nice,” Powless said.