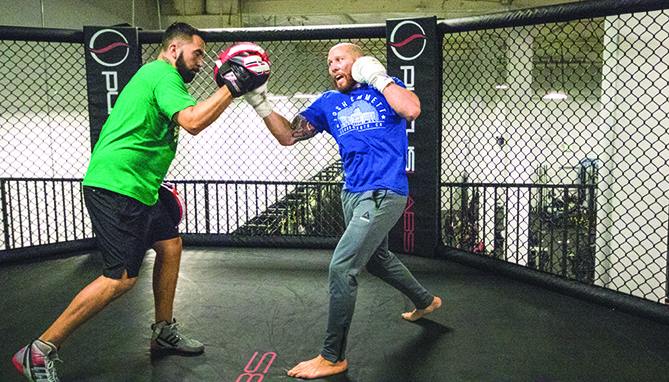 UFC fighter Josh Emmett trains in the octagon with his trainer Joey Rodriguez at on Feb. 14 at Urijah Faber's Ultimate Fitness. Emmett is preparing for his first UFC main event fight against Jeremy Stephens on Feb. 24 in Orlando, FL. (Photo by Ashley Hayes-Stone)

From where Josh Emmett is standing, he can hear the music pounding through the arena speakers.

He’s waiting for his cue to enter the octagon.

The 32-year-old is about to make his professional mixed martial arts debut with the Ultimate Fighting Championship — the largest MMA promotion in the world.

He only received notice that he was going to fight four days earlier but he’s ready, even after flying all of the way across the Atlantic into Rotterdam in the Netherlands, to go toe-to-toe against a four-year veteran of the UFC: Jon Tuck.

It was an offer he couldn’t refuse.

“It was my ticket into the UFC so I had to say yes,” Emmett said. “I was the underdog and everyone was counting me out, but I wasn’t flying halfway across the world to lose. I was ready to endure anything to get a win and kick start my UFC career.”

And endure anything he did.

“In the third round, Jon Tuck threw a wheel kick and I went to parry it and it must have hit my finger at the perfect angle and force, and basically, my bone ended up sticking out. Literally, my finger was just hanging on by the flesh,” Emmett said. “It was the weirdest sensation because every single time he would throw a kick or punch, sweat would fly-off him or me and it would go past the corner of my eye — I kept looking down because I swore he kicked my finger off.”

But Emmett finished the fight and started his UFC career the right way — with a win.

It was a tough road into the octagon for Emmett, but it was a road that started in Sacramento.

After graduating from El Camino High School in 2003, he enrolled in classes at Sacramento City College and American River College in 2005.

It was at City College that Emmett began wrestling competitively under the guide of Coach Dave Pacheco. There, he found himself ranked within the top five wrestlers in the entire state before eventually transferring to Menlo College in the Bay Area.

“The problem was that after wrestling, there was nothing really for me to do. I had two choices: I could have trained for the olympics or I could get into mixed martial arts,” Emmett said. “I chose MMA because I’d always been a huge fan.”

As a teenager, he would watch the then up and coming UFC with his friends.

“I remember watching the UFC fights in high school — that’s way before it was mainstream and before the Ultimate Fighter was even on,” Emmett said. “At the time, I was watching those guys and telling myself: ‘man, I could beat those people up.’ I was completely wrong.”

It was a lesson that Emmett would learn rather quickly after he signed up for classes at UFC Hall of Fame Fighter Urijah Faber’s gym in 2006. While taking only basic classes in the beginning, it was only a few months before Faber personally approached Emmett to gauge his interest in fighting professionally.

There, Emmett begin sparring with other hand-picked fighters that all had one goal: to make it to the UFC.

“My first sparring day was humbling because these were people who aren’t even in the UFC and they were getting the better of me,” Emmett said. “I thought to myself: ‘if I tried to fight one of those dudes [already] in the UFC, I would have gotten killed.’”

He spent months learning the brutal reality of the octagon, but it left him hungrier than ever to make the leap to the next level.

“I got into [fighting] because I wanted to be a world champion. I believe in my abilities. Look, there are people that get into this because their goal is just to step foot into the octagon. And after they go 0-1, or 0-2 and get cut from the UFC, their big claim to fame is ‘I made it to the UFC.’ I’m not okay with that,” Emmett said. “I want to be the best fighter in the featherweight division on the planet. And I’m getting closer and closer to achieving that goal.”

And now, everytime Emmett enters the octagon, he has only one goal in mind: to win.

“I feel like a modern day gladiator. It’s the craziest feeling. We go into the these venues in shuttle buses underground — it feels like we’re going into the Colosseum,” Emmett said. “And then I walk into a tunnel with my coaches and then they start playing the music and I start walking out. All of the crazy-ass fans, it’s just, it’s just insane.”