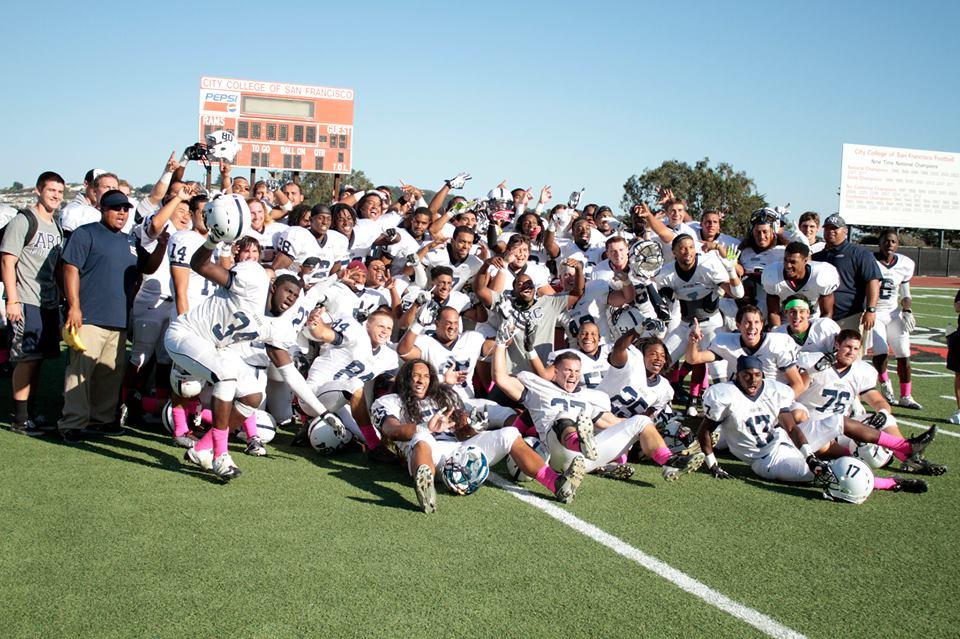 The No. 3-ranked football team American River College capitalized on five first-half turnovers to top the No. 1-ranked team in the state City College of San Francisco 34-13, Saturday at Rams Stadium in San Francisco.

The Beavers defense finished the game with seven turnovers which proved instrumental in the team posting a 31-6 lead over the Rams entering half time.

“We wanted this win not only for us but for coach,” defensive linemen Trevor Jones said. “Coach has wanted this win since he started the program, so this means more than any game up to this moment.”

The last time these two teams met was in the Northern California Championship title game in December which ended with a controversial holding call that negated a game winning touchdown by the Beavers.

“Last year we came here for the NorCal championship game and the way that things ended at that game we weren’t completely satisfied,” running back Drake Tofi said. “We took it upon ourselves, looking at it as unfinished business and we tried to come down here with a good mindset and we said that this is a business trip and we need to take care of the things that we need to do.”

Not much went right for Rams quarterback Turner Baty who turned the ball over a total of six times during the game. Baty had two fumbles recovered by the Beavers, was sacked 5 times, and threw four interceptions, two which were picked up by defensive back Malcolm Scott.

“Honestly, I was just looking the way he (Baty) was throwing and watching his eyes so I was right there at the ball,” Scott said.

The ARC defense which is ranked No.1 in the state also posted their first touchdown of the season after a sack on Baty led to a fumble recovery by defensive linemen Matthew Rashad who took the ball 39 yards for a touchdown.

Coming into the game the Rams averaged 444 yards of offense and 45.5 points per game. The Beavers defense held CCSF to 331 total yards and 13 points.

“We bend but we will not break and that’s very cliché but you know with clichés they’re used because something happens all of the time,” defensive linemen Sione Umufuke said. “With us we gave up a couple of things, had a couple of missed assignments, but then when we had to absolutely get stops we came through with it and that goes to the testament of our coaches and the way we practice.”

ARC’s offense struck first after a handoff from quarterback Jake Bist to running back Tofi was taken 37 yards for a touchdown 18 seconds into the game.  Bist left the game in the fourth quarter after being shaken up on a play. He finished the day with 141 yards, two touchdowns and a fumble.

The ground game was active for the Beavers. Tofi finished the game with 122 yards on 19 carries with a touchdown, becoming the first Beaver to rush for 100 yards since running back Devontae Booker did versus City College of San Francisco in the Northern California Championship game.

“As for the 37-yard run, it was all the (offensive)-linemen. I’m nothing without them. Everything I’m able to do is all because of the o-line,” Tofi said.

Wide receiver Adonis Griffin finished the game with 67 yards including a 17-yard touchdown reception from Bist which put the Beavers up 14-3. Trosin scored the other receiving touchdown on a 5-yard reception giving ARC a 28-6 lead.

For the second time in seven seasons head coach Jerry Haflich and the Beavers have started off the season 5-0.

“Sweet is the right word,” head coach Jerry Haflich said. “It’s so good to climb the mountain; they’ve been the pecking order for so many years. It’s really good for the boys, for the program, for the school and for the fans. Our kids worked really hard and they believed if they put in the work they would have the opportunity to win.”

The Beavers have a bye this upcoming week but will resume play at home versus San Joaquin Delta College Oct. 19 at 1 p.m.