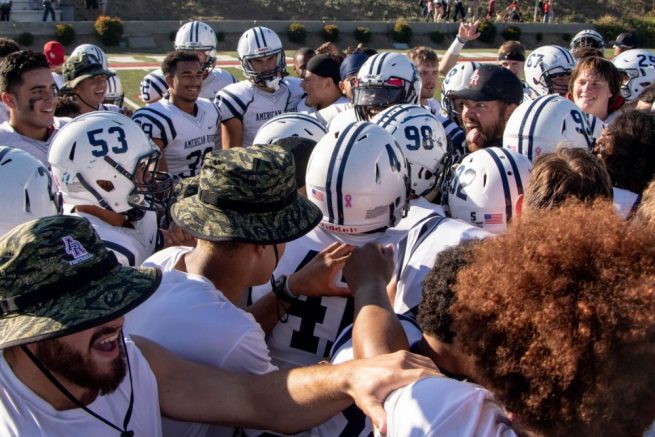 The American River College football team celebrates a 22-7 victory after the game at Sierra College on Oct. 20, 2018. (File Photo)

As the semester comes to a close at American River College, many student athletes and their teams are looking back on the past season and toward the future. With the summer semester being all that stands in the way before football starting up, head football coach Jon Osterhout says he is hopeful for the future.

“I thought this season certainly ended on the right note,” Osterhout said. “It was exciting and I think we have a really good young nucleus of student athletes coming back from that football team. Hopefully they’ve gained a lot of experience and knowledge.”

He noted that the team overcame “quite a bit of adversity” in the past season, but for the most part chooses to focus on the positives.

Quarterback Marco Baldacchino agreed, adding that the season was marred by “a lot of bumps in the road.”

“We didn’t play to our standard in the first four or five games,” Baldacchino said. “We set the reset button and finished the season strong, but we didn’t have the season ARC is known to have. It was a learning experience for everyone … I was proud of the grit and heart our team had to finish the season out on a strong note.”

Though Osterhout acknowledges that there were a number of notable games and plays throughout the season to reflect on, he affirmed that the focus was really toward the future.

“During the offseason we go through scheme analysis and evaluation,” Osterhout said. “Looking at our current roster and who’s coming back, what kind of value they bring into the program and schematically look(ing) at areas of improvement where we can get better as a whole.”

At the moment, the team is gearing up for summer training, having spent 14 weeks in strength and conditioning work, while also focusing on growing mentally as a team.

“I think they’ve got a really solid understanding what our expectation level is within our football program, and I like where we’re headed,” Osterhout said. “It’s a long ways before we get there, but I certainly like this starting point where we’re at.”

When it comes to preparing, Baldacchino said he sticks to his basics.

“I play like I know how to play, stay on top of my footwork and watch a lot of film,” Baldacchino said. “Physically, I’m just trying to get stronger and put on weight. Mentally, I just stay even … and enjoy every moment with this big family we have at ARC.”

As for improvements for next season, Osterhout said he hopes that he can bring the team together from a leadership standpoint.

“It comes with just being committed and taking a professional approach,” Osterhout said. “The preparation goes into it, doing it day in and day out and everything else takes care of itself.”

Baldacchino cites the team’s overcoming of past difficulties in particular as a mark of strength for the next season.

“It just goes to show how capable this team is of making a run at state this year,” Baldacchino said.