American River College guard Matt Lyon is guarded by forward Dontay Anderson during a scrimmage on Nov. 8, 2016 at ARC. The team’s planned game against William Jessup J.V. was cancelled due to eligibilty reasons. (Photo by Mack Ervin III)

With a lineup that has only two returning players, the Beavers are a young team who are looking forward to the challenge of improving after coming off of an 8-18 record last year.

“I was surprised by the maturity of our guys, but Richard and Jericho are really great leaders and we are happy to have them on our team,” said freshman shooting guard Armani Rivers.

Coach Mark Giorgi also commented on how young the new team is and what they as a team need to work on.

“It’s hard because they haven’t played together before,” Giorgi said. “You just have to decide whether to work on plays or build chemistry. We’re trying to do a little of both.”

“We’re all new except for two guys but our guards are pretty good and solid. Post guys got a lot of work but they were good tonight. We definitely feel like we’re gonna be better than last year,” Giorgi said. 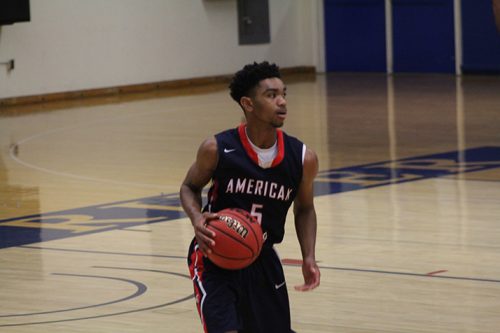 American River College guard Everett Campbell brings the ball upcourt during a scrimmage on Nov. 8, 2016 at ARC. The team’s planned game against William Jessup J.V. was cancelled due to eligibilty reasons. (Photo by Mack Ervin III)

The start of the season came on Tuesday when the Beavers were supposed to play William Jessup University’s J.V. team, but due to the fact that William Jessup did not have enough eligible players to play, they were forced to cancel the game.

Coach Mark Giorgi commented on what happened,  “William Jessup just called me and said their players were ineligible and they’re trying to reschedule it but I have no idea what the heck was going on,” Giorgi said.

The Beavers just ended up playing each other in a scrimmage for one twenty minute half and one 10 minute half.

Sophomore Jericho Avery, who ended up not playing last year but is returning to the team this season, is looking forward to taking the leadership role on the team.

“It is different but I just gotta push through it. If your teammates see you break down your team follows, so I gotta make sure I am concession of what I do and I am excited to take the role of the leader,” Avery said.

Freshman point guard Matt Lyon who talked about what the upcoming goals of the season are.

“I think we can do great things, we have a lot of talent on this team,” Lyon said. “I feel like we definitely got some confidence from the jamboree we had where we won all of our games.”

“If we could just play together all season and just keep the positive mind set going I think we have the chance to do some really great things,” Lyon said.

Giorgi also echoed those thoughts, saying that the goal for the team is to win their conference.

“To win the league is always our goal. To win the Big 8 conference,” Giorgi said.

The Beavers’ next game is on Thursday when they travel to Solano to take part in the Solano Tournament.