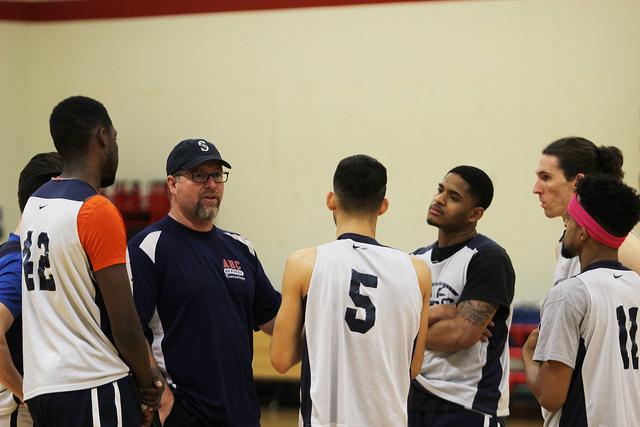 American River College's men's basketball head coach Mark Giorgi talked to some of his players, during practice Thursday. The team will play its sixth conference game of the season against Sierra College Friday. Photo by Matthew Nobert

American River College’s men’s basketball team has had a rough start to the season so far with a 5-12 record, but is looking for a big win in a game against league rival Sierra College Friday.

The team has been struggling with a lack of consistency, experience and cohesiveness with the majority of the team being freshman and several sophomores having a hard time playing at same level of production from game to game.

Based on their play from last season, many of the returning players were expecting to play better than they have so far this season.

“Coming from last season, making the playoffs, and now we are on the outside looking in,” said sophomore forward Marcelas Perry. “This season so far, we have underachieved.”

In agreement with Perry, fellow sophomore Maalik Hazziez said that he feels the team is still lacking unity.

“I think the effort is there for some players, but as a team we’re still coming together,” said Hazziez. 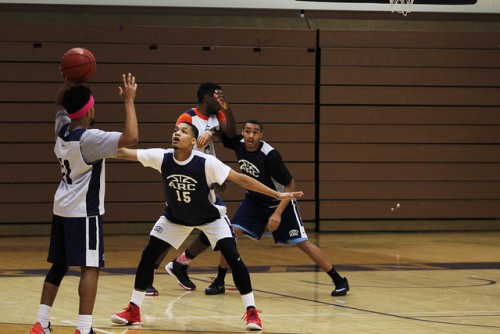 The team’s next game against Sierra could be a serious test of how well this team is growing as a unit.

Sierra has come out strong this season, is on a four game win streak and beat number one ranked Cosumnes River College 85-74 to bring them to a 4-1 record in conference play.

“We watched film and know their guys,” said Giorgi. “We just got to get out there and do what we do the best we can.”

Despite the team’s record, the game is not expected to be a blowout as ARC has played well against tough teams so far this season. They lost to number one ranked Cosumnes by only one point and then lost to number sixth ranked Modesto 70-57.

“There’s really nobody that’s dominate in conference, everybody is pretty even,” said Giorgi. “So, on any night anything could happen.”

If ARC wins against Sierra, they may damage Sierra’s chances at making the postseason, as Sierra is currently fighting for first place with Cosumnes.