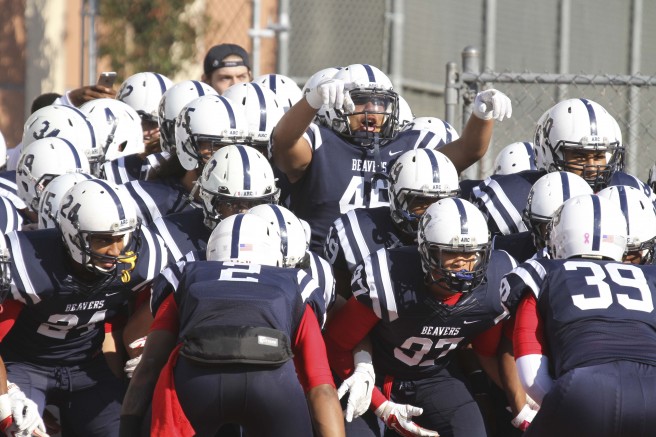 ARC players link arms and dance before they take the field during the Gridiron Classic Bowl on Saturday, Nov. 21, 2015. ARC lost 24-17 in overtime. (Photo by Jordan Schauberger)

The story of the 2015 season for the American River College football team was one of redemption and revenge, beginning when ARC was knocked out of last years playoffs by City College of San Francisco after a last second field goal to finish the game 17-14.

The season opener against Modesto was a chance for ARC to show that it was back strong with a new, young and ready-to-win team, but things did not go according to plan and ARC had a devastating defeat of 41-10.

Head coach Jon Osterhout addressed his team moments after the loss, determined to fix what had gone wrong.

A defense that had been so stingy against the run in 2014 gave up 212 yards rushing to a team that finished 4-6 the year before and had lost its star running back. 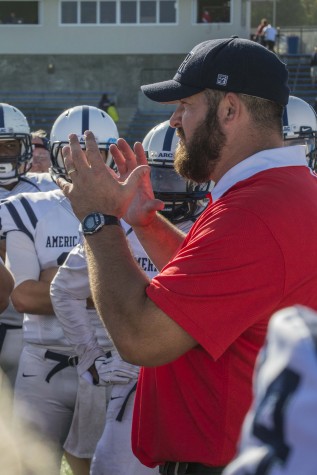 American River College head coach Jon Osterhout gives his team a pep talk after their game at College of San Mateo on Oct. 3. The AR Beavers lost the game 42 to 10. (photo by Joe Padilla)

This not only left the team with a wound in its defense but also with the question of who would step up as the new team leaders and bring the team to playoffs once more.

Despite its rough beginning, ARC was able to rebound, winning its next two games against De Anza College 38-2 and defeating San Joaquin Delta College 44-24. 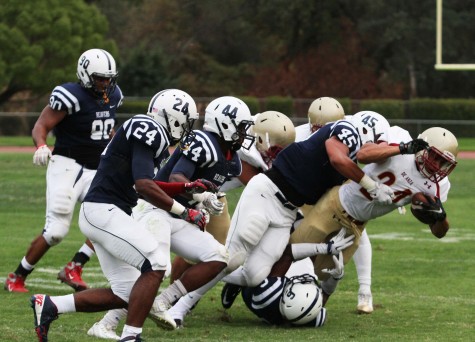 The two games not only represented a bounce-back for ARC as a team, but also a recovery for quarterback Jihad Vercher.

After getting benched in the loss at Modesto, Vercher threw for a combined eight touchdowns and 488 yards with no interceptions.

“I think coming back week two after the opener was a huge statement for our football program,” said Osterhout. “It just showed we’re a tough football team mentally.”

Sitting at 2-1 after the wins, ARC had to go on the road to face off against arguably its toughest challenge of the season at CCSF with revenge on its mind.

This time around, ARC was the one to cause the upset when kicker Sam Keil booted in the game winning field goal from the 25 yard line as time expired to win with a 20-17 final.

“The San Francisco game — it was a great moment,” said freshman linebacker Jordan Kunaszyk, who finished the season as NorCal Defensive Player of the Year.

“It was a moment that people really started to buy in and achieve our goals,” he continued.

The win vaulted ARC to the top of the NorCal regional rankings and sent the team into the College of San Mateo with a good momentum. 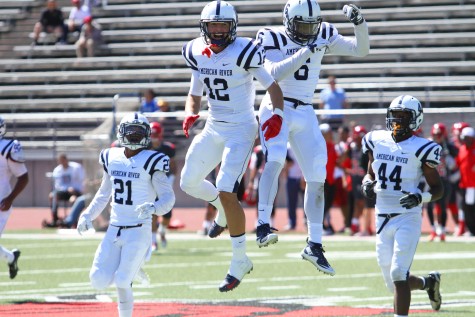 After its victory against San Mateo in 2014 vaulted ARC’s status to arguably the best team in the NorCal league, this season ARC felt the payback when San Mateo rolled ARC with a 42-10 win.

In that game, the same problems with run defense plagued ARC once again, as it gave up 298 yards on the ground.

After the loss dropped ARC to 3-2 on the season, it defeated three consecutive league opponents.

ARC looked like it was going to have another season in which it dominated its league with three games.

This streak folded when Butte came up with a last minute Hail Mary play to get the game winning touchdown and won 27-24.

The loss tied up ARC’s championship title for the NorCal league and put it in a tight spot for its chances to make the playoffs.

Heading into its final game of the regular season against Sacramento City College, ARC needed CCSF to beat San Mateo, Chabot College to lose to Laney College, and Butte College to lose College of Siskiyous, among other scenarios.

With its playoff chances up in the air, ARC defeated Sac City 38-18, but missed the playoffs as Chabot defeated Laney 48-21.

Even though it missed the playoffs, ARC would host SJDC in the Gridiron Classic Bowl, where it lost 24-17 in overtime.

Despite the loss, ARC running back Ce’von Mitchell-Ford, who finished second on the team in rushing with 605 yards, said that he is happy with how the season went.

“Things didn’t fall the way we wanted to but we gave it our best shot. At the end of the day that’s all you can really ask for,” said Mitchell-Ford.

Vercher, who finished the season with 23 touchdowns, seven interceptions and 2,534 yards passing, said the team had a “great run.”

“It’s going to stick with me forever, because it’s hard to find a team like that, where everybody loves each other,” said Vercher.

Matthew Pierson contributed to this report.

Be the first to comment on "ARC regresses, misses playoffs in 2015"