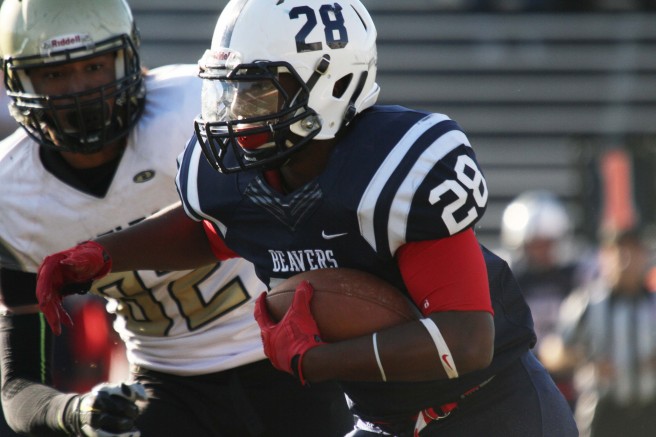 American River College running back Armand Shyne, who ran for 734 yards and 8 touchdowns this season, was given All-Conference honors representing the NorCal League for the 2015 season, as well as ten of his teammates. (Photo by Barbara Harvey)

11 members of American River College’s football team were given All-Conference honors representing the NorCal League for the 2015 season, with five being freshman.

Keil, whose biggest kick of the season was arguably his game-winning field goal to beat City College of San Francisco on Sept. 26, said he did not expect the honor.

“I knew there were some other good kickers in the conference and I thought (the award) would have gone to them, not me,” Keil said. “At the end, I just didn’t expect it to go to me.”

Wide receiver Marc Ellis, who was the team’s leading receiver with 43 receptions for 654 yards and 4 touchdowns, said he was also surprised by the honor, but said he “knew he deserved it.”

“It’s definitely an honor,” Ellis said. “I know all offseason and all last year I’ve just worked my butt off.”

Ellis won’t return to ARC for the 2016 season but does not yet know where he will transfer to.

Harrison was given an all-conference nod in his third year after redshirting his first season and playing left tackle in 2014 before shifting to the right side in 2015.

Despite the award, Harrison said he would rather the honor be one given to the team.

“First team all-conference, that is a good thing to bring along with me as I go on to a four-year, (but) I would rather have it be a team award,” Harrison said.

Carlson said he thought the award can be attributed to the team’s running backs and offensive scheme.

“We definitely all play well together as a team,” Carlson said. “(There are) a lot of good spots.”

Mitchell, who will be returning to ARC for his sophomore season in 2016, said the award helps bring attention to ARC’s football program.

“Just the whole process and everything, how he do (things) here, it’s just really gratifying and humbling to be able to get that honor,” said Mitchell.