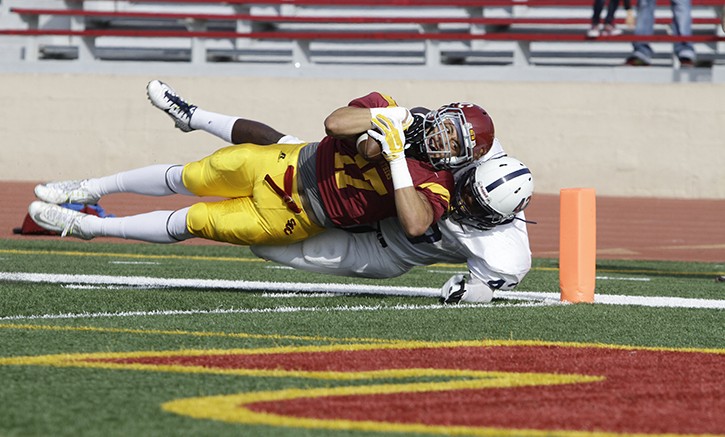 Former ARC linebacker Lawerence Hall stops a Sacramento City College player from scoring a touchdown during last seasons game on Nov. 15, 2014. ARC won the game 44-23 and must win the game Saturday to have any chance of making the playoffs. (File Photo)

American River College football is set to close out the regular season with a home game against district rivals Sacramento City College on Saturday.

Currently Sacramento City College is fourth in the NorCal League with an overall record of 3-6 and are coming off a 54-17 win at Feather River College.

ARC was crushed by a last second loss to Butte College last week as they threw a 65-yard hail mary in the last play of the game, which gave Butte the 27-24 win. If ARC had won the game they would have secured the NorCal league title and a spot in playoffs.

During last week’s game, lead running back Ce’Von Mitchell- Ford went out with an ankle injury in the first quarter.

Mitchell-Ford has been out for practice so far this week and coaches are unsure of his return for Saturday’s game, but Mitchell-Ford is feeling hopeful and wants to pad up this Saturday and get back on the field.

If Mitchell-Ford does not return to the field Armand Shayne will be leading the backfield for ARC.

The game against Sac City is must win now with the loss against Butte, but even with a win there are still multiple scenarios to get ARC into the playoffs.

Even though the loss against Butte was hard hitting, the team has not slowed its momentum at all and seems to be in very high spirits.

“I like where this team is mentally, its resolve, and how resilient they all are to be able to push through that and focus on what’s next,” ARC head coach Jon Osterhout said about the team’s ability to look past last week’s loss against Butte.

ARC showed resilience by the end of Tuesday’s practice. There was laughter and a sense of unity from every player.

“Every Tuesday we come out here and get it, and being out here with these guys has made me love football again,” quarterback Jihad Vercher said at the end of Tuesday’s practice.

Being the final game of the regular season for ARC and for some players possibly being their final time playing college football, it being a home game has significance.

“It’s really big that we get to finish out our season on our field with our fans that love us, and we get to play for them,” Vercher said.