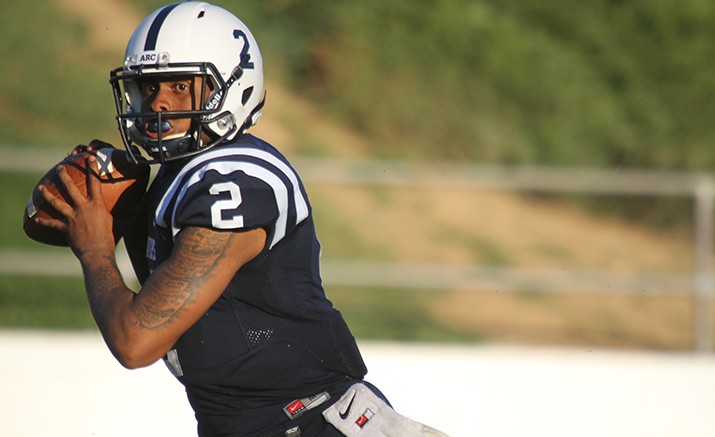 American River College quarterback Jihad Vercher grew up in South-Central Los Angeles. He said he focused on football and homework in spite of the sounds of gunshots in his neighborhood (Photo by Barbara Harvey).

A previous version of this story falsely reported that “the … San Andreas area” was occupied by “Bloods, Crips and other gangs.” In fact, those gangs occupied the Los Angeles area.

When he was six years old, American River College quarterback Jihad Vercher watched in horror as someone from his South-Central Los Angeles neighborhood was chained to a fence and shot dead behind his house.

“That was the most traumatic thing I’ve ever seen in my life,” said Vercher. That was scary.

“I’ll never forget that day … hearing the next morning, (his) momma screaming and crying for her son.”

The neighborhood, and the ones surrounding it, were occupied by Bloods, Crips and other gangs from the surrounding area.

Witnessing this killing influenced Vercher to focus his life on his schoolwork and football and to never venture far from his house.

“I stayed inside; (My parents) never let me outside,” said Vercher. “My parents, from when I was little, told me ‘You stay inside, keep your head down and do what you got to do.’ ”

Vercher said that he was frustrated by this as a kid, but grew to understand his parent’s reasoning as he grew older and saw some of his friends go to jail or be killed by gang violence.

The sound of gunshots was a common one for Vercher to hear at night, and he became accustomed to their constant presence as he grew older.

As a child, however, he was always fearful that one of those shots were directed at one of his parents.

“Every time I would hear it, I would get scared,” said Vercher. “(I) just let it go, ‘oh there go gunshots’ just continue doing my homework or playing a game.”

Vercher called growing up in this environment “a learning experience.”

“I’ll never forget that day … hearing the next morning, (his) momma screaming and crying for her son.” —Jihad Vercher

“You lose friends and family almost every year,” said Vercher. “It shows you to take advantage of your opportunities. You see (friends going to jail and being killed) and you go ‘This guy had this opportunity to go to college and play ball and he chose gang violence over that.”

Upon discovering that the team needed a quarterback, his father pushed him to step into that role.

“He always thought that I could throw and always pushed me to play quarterback, but I never really got into it (before),” said Vercher.

Vercher did not play extensively until his sophomore year when he threw for 1,937 yards and 26 touchdowns.

He played football in all four of his years in high school, finishing with 85 touchdowns and 7,357 yards passing in his career.

After his senior year, Vercher received offers from seven schools, including Cal, Eastern Washington University, the University of Idaho and Sacramento State.

Vercher eventually orally committed to play at Sac State, a decision he said was influenced by the time that recruiting coordinator Aaron Ingram spent with him.

“We developed a real strong relationship over the few months that he was recruiting me. It was more like a family type thing with me,” said Vercher. “A lot of other schools, they reached out and stuff like that, and talked to me every now and then, but coach Ingram stood out the most, because he came and visited us.”

Vercher, 18 years old at the time, lived in a dorm room with one of the team’s running backs but that even though he was around many people, he missed not being able to see his family.

When he first moved to Sacramento, Vercher said that he noticed the difference between the two cities.

“It was different,” he said. “I’m from the rough area of SoCal, so coming up here to Sac, it’s a lot more quiet, lot safer it’s a big difference.”

While at Sac State, Vercher played his freshman year before tearing the patellar tendon in his right knee and redshirting his sophomore year.

It was this injury, Vercher said, that caused him to lose his passion for the game of football. He thought his knee was never going to heal.

He was released from Sac State prior to his junior season after appearing in nine games and throwing for 27 yards.

On the day of his release, ARC football head coach Jon Osterhout called Vercher and invited him to visit and see the campus, which Vercher agreed to. 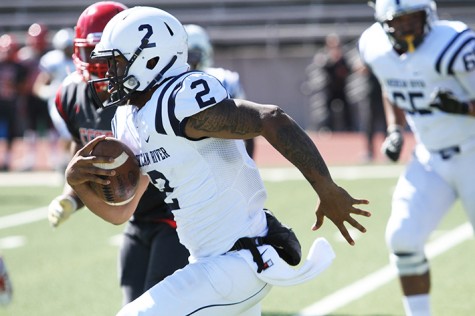 Despite his leaving, Vercher said he would not mind returning to Sac State.

Immediately, Osterhout noticed that Vercher had an “it factor.”

“He’s been really solid for us. He’s only going to get better. He’s got the keys to the car and it’s a nice car,” said Osterhout.

After seeing the school’s athletic facilities, Vercher agreed to stay in the Sacramento area and play football at ARC.

“I owe coach O a lot, because I could be at home, doing dirt, being a negative influence on my younger siblings,” said Vercher. “Just doing bad things and instead I’m here, sticking to the game.”

Vercher, a social science major, said he wanted to get into engineering before the season, but was told he could not due to time constraints due to other classes he was taking.

Once done with football however, he said he will start to focus on it again.

“He’s just a great leader on the field,” said Dumetz. “He picks up the team a lot. … He makes sure all his players are good. He tries to perfect his game to a t.”

Dumetz said that when he first met Vercher, he never sensed any kind of distance between the two.

Vercher, who has aspirations to go to the NFL, said that he wants to be drafted by his favorite team, the Pittsburgh Steelers.

Through seven games, he has thrown 14 touchdowns, 1,440 yards and 5 interceptions for ARC.