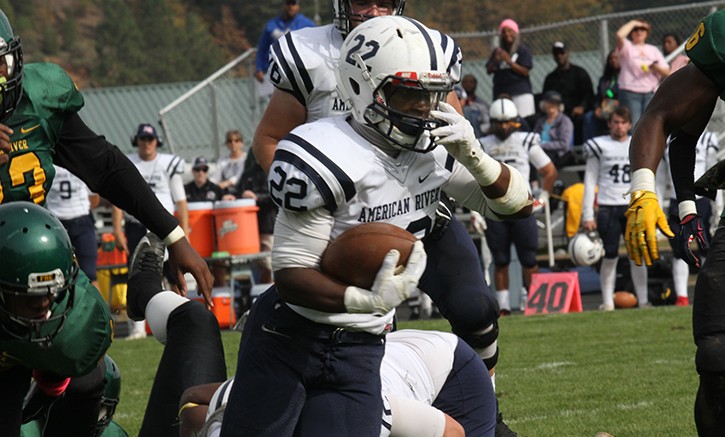 American River College running back Ce’von Mitchell-Ford adjusts his facemask during a 22-yard touchdown run against Feather River on Oct. 24, 2015. Mitchell-Ford had 93 yards on 16 carries with a pair of touchdowns in ARC’s 44-14 victory. (Photo by Nicholas Corey)

ARC is now 5-2 on the season and in first place in the NorCal League.

The second half has been ARC’s weakness so far this season and been a big focus during this last week of practice following the win against the College of the Siskiyous was closer than it should have been.

ARC’s evolution and ability to finish this week was the topic of discussion for quarterback Jihad Vercher.

“When stuff was going wrong in the past, we had our heads down. Today we focused and kept it up. … We focused on finishing, that was our focus this week,” said Vercher.

On the opening drive, ARC’s rush attack was key with four of its seven plays on the ground.

ARC heavily used running back Ce’von Mitchell- Ford. On its opening drive, Mitchell-Ford went for 28 yards on 4 carries with a reception for 9 yards and led the charge all the way to FRC’s 15 yard line.

“I feel like I had an amazing performance today,” Mitchell-Ford said after amassing 93 yards on 16 carries for the game.

“We studied really hard against this team during practice with film and running simulations,” ARC defensive lineman Jamar Claibourn said on the preparation.

ARC was able to force a blocked punt and recovered the ball at the 7-yard line, leading to Mitchell-Ford running it in from the seven and making the score 14-0 ARC.

ARC scored a third touchdown in the opening quarter when ARC running back Armand Shyne blew past Feather River’s defense for a 57-yard touchdown. 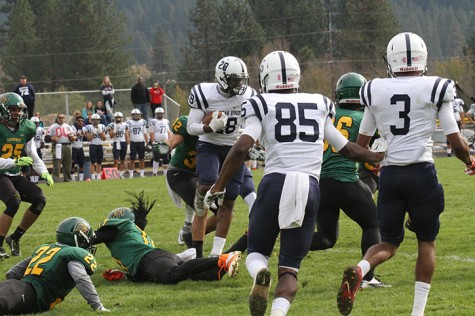 Armand Shyne, running back for American River College attempts a spin move against Feather River on Oct. 24, 2015. ARC was victorious 44-14, Shyne led the team with 108 yards on 10 carries with a touchdown. (Photo by Nicholas Corey)

A pass from Feather River quarterback George Barajas to wide receiver William Callender for a 29-yard touchdown got the team on the board late in the first half.

ARC ended the first half with a 22-yard touchdown by running back Mitchell-Ford. Mitchell-Ford had 33 of the 75 yards on the drive after running in his second score of the night and ARC’s fourth.

The second half has been the weakness for ARC so far this season and the team focused on playing a complete game during this last week of practice.

ARC’s defense gave up 229 of its 390 total yards to Feather River during the second half but only one more touchdown.

“We stick to our plan and we continue to evolve as a football team. … At the end of the day we finished out the second half,” said head coach Jon Osterhout.

“We were still able to keep going and outlasted them,” Claibourn said on ARC’s defense keeping Feather River out of rhythm.

Vercher was able to throw one last touchdown for 58 yards to to wide receiver Zack Suarez finishing with 140 passing yards on 10 completions, before getting replaced by Chris Guillen who played out the last few minutes of the fourth quarter.

“Looking at how we competed for 60 minutes, it’s scary what we can do,” said Vercher.

“Coach challenged us and we responded. … It’s just out mojo, our vibe right now. We’re starting to come together as a team.”

ARC now will set its sights on league rival Sierra College next week for another league matchup that will take place at Beaver Stadium on Saturday at 1 p.m.