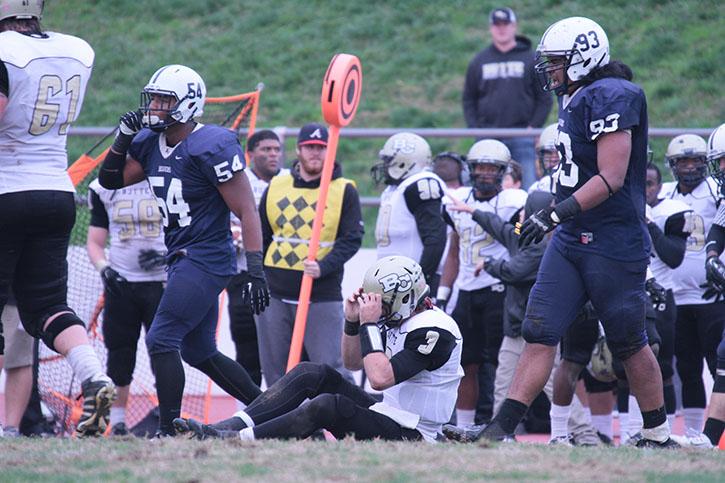 Following the win against Butte, ARC will shift focus to their next opponent, City College of San Francisco.

The Beavers shut out CCSF in their meeting Sept. 27, 13-0, but the Rams have ripped off seven wins in a row since then, defeating opponents by an average of 38.7 points per game.

Also worth noting, ARC won that game in September at their home stadium. This time, the Beavers travel to San Francisco.

The winner of next Saturday’s matchup will be NorCal champion, and head south to face the SoCal champion: Either Mt. San Antonio College or Riverside College, depending on who wins.

Strong play up front from Perez and company

Sophomore defensive lineman Antonio Perez was a monster, finishing the game with 2.5 sacks, three tackles for a loss, and a forced fumble.

Jordan Carrell, who earlier this week was named the NorCal defensive player of the year, had 1.5 sacks and and 3.5 tackles for a loss.

Altogether, ARC finished with five sacks and 12 tackles for a loss, taking away a total of 64 yards away from Butte’s offensive total.

Perez credited an additional motivational factor in the defense’s dominance: Fear of losing their only playoff game.

“It was all effort. We didn’t do anything different from last week … we just knew we had to step up. It was win or go home.”

Is ARC’s defense carrying the team?

After defeating Butte, defensive back Kameron Williams made a claim that echoed similar statements from other ARC players throughout the season.

“I feel like the defense is the strong point of the team. We carry the team when we have to and do what we’re expected to do,” said Williams.

The numbers back it up, too.

ARC has allowed just 19.2 points per game from opponents this season, putting it’s defense at  seventh in the CCCAA.

A big part of that number is ARC’s ability to stop the run. As a unit, the Beavers have allowed opponents to rush for 67.9 yards per game, third in the state.

ARC’s offense scores 31.1 points per game, ranking the unit as a whole 30th in the state.

Take out ARC’s six defensive touchdowns, and that average drops to 27.3 points per game, which would put the ranking at 45.

“They did it for us today,” Trosin said.

A quest for cheeseburgers

Running back Deon Ransom was very thankful for his offensive line’s performance the last two weeks.

Despite multiple injuries among the five, the o-line helped Ransom to his eye-popping totals over the last two weeks.

Ransom is so grateful, in fact, that he promised to buy McDonald’s cheeseburgers for the whole lot of them.

Center Rafael Aguilar is ready for the grub, or so he said on Twitter following game reports.

Look for Ransom to run even faster next week against City College of San Francisco, considering how much lighter his pockets may be. 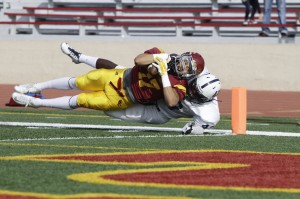 Photo: Barbara Harvey
After suffering their first loss to Butte 31-28, ARC came back with a seemingly easy win against Sacramento City College on Nov. 15. Exactly one week later, ARC took revenge against Butte in a playoff rematch, winning 20-17.

Be the first to comment on "Football notebook, Nov. 22"