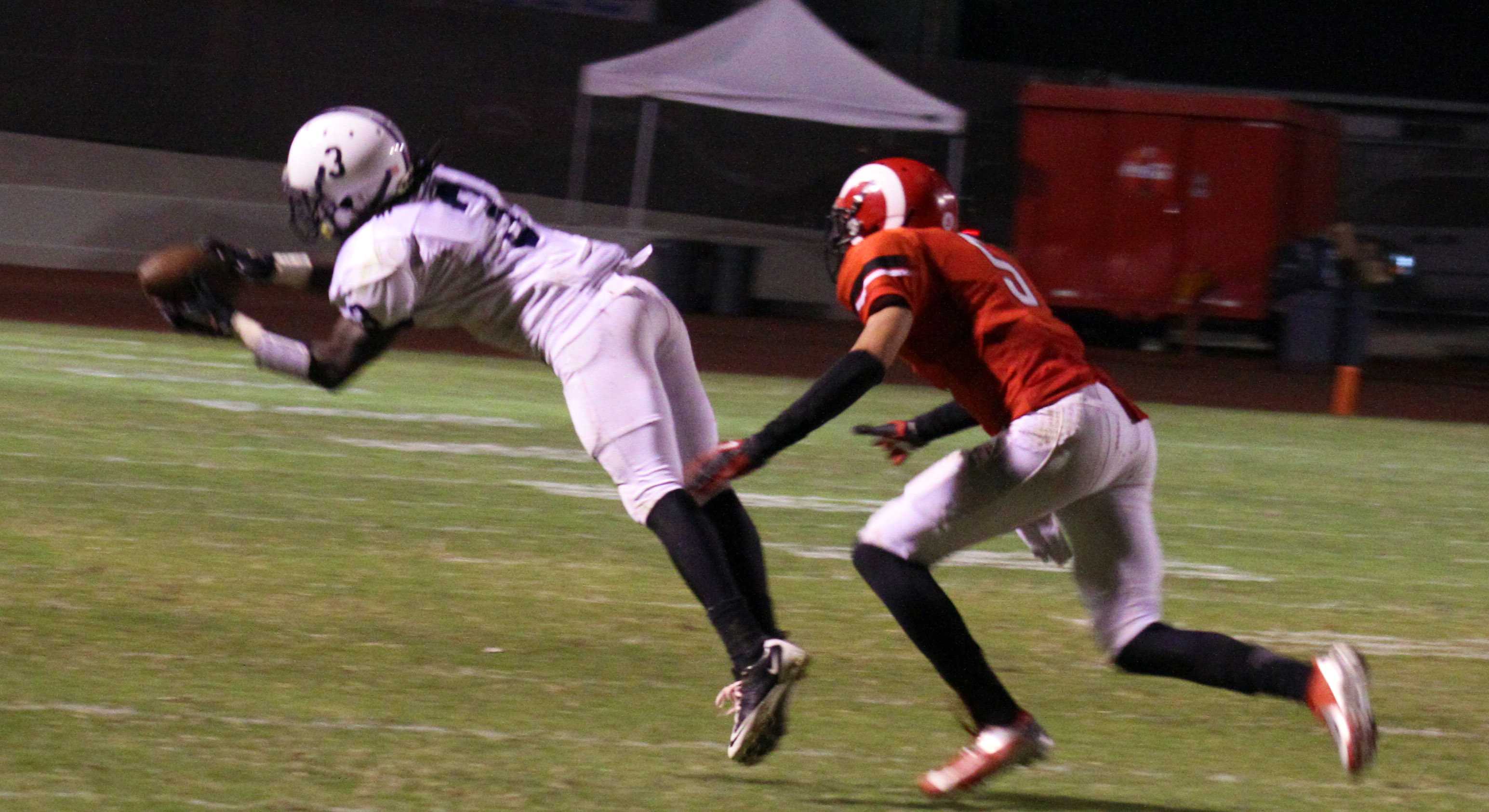 FRESNO – When it mattered most, quarterback Jonathan Kodama played his best game for American River College.

In the midst of a two-game losing streak-led by four touchdown passes by Kodama-the Beavers came from behind in the second half en route to a 31-21 road win over Fresno City College on Saturday, Oct. 20.

“He was dealing,” ARC Offensive Coordinator Chris Parry said. “He threw into tight windows. Even some of the drops, he was getting in guys hands. He was phenomenal.”

Down 14-3 with less than two minutes to play in the first half, Kodama orchestrated a drive, going 4-5 for 55 yards ending with a 2-yard score to freshman wide receiver J’Juan Muldrow to bring to score to 14-10 at the half, and giving the Beavers momentum.

“We talked about managing the game better as a coaching staff and I thought that came to fruition on that drive,” ARC Head Coach Jerry Haflich said. “We were able to get the ball into the playmakers hands and we played within ourselves. We didn’t panic.

“Once we got that touchdown, everybody got excited and everything was great,” Kodama added. Kodama finished 25-40 for career highs in passing yards (397) and touchdowns (4).

Now with three games left in the regular season, the Beavers are in a four-way tie for second place in conference and with momentum that was nearly lost if ARC lost to Fresno.

“As a football program, this is a great win, and for our players too,” Haflich said. “They learned to come from behind and learned to overcome. The spirit that rose up from within them didn’t come from us. They brought that on. They made that happen.”

After losing two straight for the first time since 2008, Haflich knew his young team could have easily given up on the season with a loss just as quickly as the confidence of the team has switched to a bunch that now believes in each other.

“It was a do or die for us. If we don’t win, our Valley Conference thoughts are done,” Haflich said.

The Beavers also got healthier this season, after three defensive starters didn’t play against Delta on Oct. 13, the Beavers played at full strength and got a boost on offense from Diondre Batson.

After spending the last two Saturdays on previously-scheduled recruiting trips for the U.S. Olympics Trials speedster, Batson was key in opening up the offense, giving ARC a vertical threat that the offense hasn’t had all season.

Batson finished with 122 yards receiving, one touchdown and a 69-yard slant pass where Batson was brought down from behind. Batson jokingly said after the game that the defender got an angle on him, keeping the speedster out of the end zone.

“He just took an angle. That’s all,” Batson said. “I just tried to score. I saw the end zone and my eyes got wide and someone grabbed my shoulder and I said ‘dang it.’”

After the half, the Beavers looked like the momentum after the score going into intermission might have been lost. Tyler Trosin (96 receiving yards and 1 TD) fumbled a punt return after a three-and-out by the defense to open the third quarter. The Rams drove the field on the ensuing drive, capping off with a 14-yard pass, putting FCC up 21-10.

But on the next drive, Kodama found Batson for a 26-yard precision pass to the back of the end zone.

Following an interception by Petty on a tipped ball in the end zone, the ARC offense, with the help of the 69 yard pass to Batson, needed just four plays and a two yard touchdown pass to Corey Meshack for a four-yard score, giving the Beavers a 24-21 lead with just over nine minutes left in the fourth quarter.

The Beavers come home next Saturday, Oct. 26 against Modesto at 1 p.m.

-It was homecoming for Fresno City. A city police helicopter did a fly over as the Rams were introduced minutes before kickoff.

-ARC wide receiver Jakori Ford got some good news. His knee injury is not as severe as first thought. He tore two ligaments and is on a recover plan and hopes to play for the Beavers in 2013. He is walking with a brace just a month after a nasty injury at Sacramento City.

-Trevor Jones led the Beavers with eight total tackles in his first start.

-Scott Patalano had an interception in the first half.

-For the second time this season, Rozale Byrd intercepts a pass at the end of the game. The first was for a touchdown in Sept. Against Fresno, the interception allowed the Beavers to kneel down for the win.

-Devontae Booker injured his ankle in the first half and did not return to action. Does expect to play next week against Modesto. His seven rushing yards a career low, and keep the sophomore one yard shy of 1,000 rushing for the season at 999.