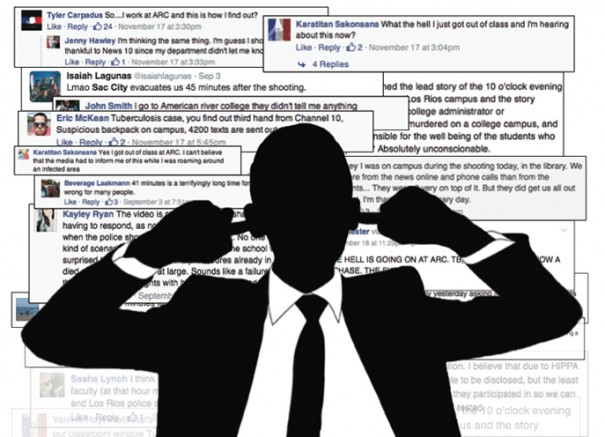 Within the last month, your life and safety were at risk from an armed felon on campus who injured a woman and a highly contagious, deadly disease. You may not have heard about this because ARC had no plans to directly inform you until it faced intense media scrutiny.

Administrators at American River College, whose recent lack of communication with students has fostered a culture of silence, need to stop doing the minimum and take seriously their ethical obligation to inform us about serious risks to our safety.

On the evening of Nov. 17, while students were in class, an armed felon trying to evade police capture injured a pedestrian in a hit-and-run in the parking structure before fleeing on foot, leading to an hour-long manhunt — part of which went through the campus — and required the assistance of the Sacramento County Sheriff’s K9 unit and helicopters.

In spite of classes being in session during the manhunt, no alert was sent to students, faculty or staff. No lockdown was initiated, despite an armed felon running through the center of campus while police gave chase with their guns drawn, according to witnesses.

Los Rios Police Capt. John McPeek dismissively said that the incident wasn’t reported because it was not deemed a threat to the community.

Perhaps he should tell that to the woman who was injured during the chase.

Unlike the arrest of Kristofer Clark for what police alleged was a “credible threat” on campus on Oct. 9, the administration did not hold a press conference to boast. Officials did not even send an email letting the student body know what had happened.

On the very same day, it was announced that an American River College student was in isolation at a hospital after being diagnosed with active tuberculosis, a deadly, contagious disease that can be spread by an infected person coughing or even just speaking.

The administration originally had no plans to send a general notification to students informing them of the risk, and only acquiesced after a reporter from ABC 10 News grilled a school nurse in front of television cameras.

Students and school employees took to social media, asking why they found out about the potentially harmful situation secondhand from the news media rather than the school.

If the school was concerned about causing a panic, the best way to avoid doing so is to control the narrative through timely and open communication rather than remaining silent, which gives the impression that the administration has something to hide.

“Los Rios Police Capt. John McPeek dismissively said that the incident wasn’t reported because it was not deemed a threat to the community. Perhaps he should tell that to the woman who was injured during the chase.”

ARC President Thomas Greene said that it was his decision not to send a general notification to the students about the armed felon evading police on campus because there was not a continuing threat after the arrest.

But his message of a “shared responsibility” for safety between students, police and school employees means nothing when the administration makes no willing effort to keep the community informed.

Greene said that he made the right decision not to send a notification because sending too many might risk “desensitizing people to the message.”

Or, as McPeek put it, “do we really need to submit a notification for everything we do?”

Scott Crow, ARC’s public information officer, said that he gets complaints that the school sends too many notifications as it is — citing emails about the Oak Cafe as an example.

Common sense would dictate that most people can tell the difference between an email about a police pursuit of an armed felon on campus and an email about the Oak Cafe.

All these excuses are ways of avoiding the truth. The reality is that the administration doesn’t feel the moral or ethical obligation to tell the people who study and work here that their safety was seriously at risk.

It is obvious that emails about the Oak Cafe are not equivalent to a notice that you may have been exposed to tuberculosis, or that an armed felon who had already injured someone was running past the bookstore — the police unable as yet to apprehend him — while classes were in session.

“This culture of back slapping and putting in the minimum is unacceptable from any organization, but especially from those entrusted to education.”

Keep in mind that after Clark was arrested for what police alleged was a verbal threat — an allegation that the district attorney decided not to follow up on with actual charges — the school held a press conference.

In this newest instance, we have a felon with a gun on campus less than three months after the first school shooting in the Los Rios district’s history, and all anyone can see is the bare minimum — a vague entry on the police department’s website that doesn’t even specify the number of suspects and the fact that the suspect hurt someone. Average students wouldn’t know to check this, and the administration knows that.

The fact is that there is no logical way to reconcile a sincere desire for  “shared responsibility” with this reluctance to letting students, faculty and staff know what risks they face.

This recalcitrance on the part of the administration isn’t limited to the lack of notification regarding the armed felon police chase and the hesitation to notify about the tuberculosis isolation. The district in general is loathe to transparency and to holding itself accountable.

After October’s external report on the Sept. 3 shooting at Sacramento City College that left a student dead in the parking lot during a busy school day said that the response of the emergency ALERT text message system was “unacceptable,” Los Rios officials released a self-congratulatory press release downplaying the serious criticisms made of the emergency response.

This culture of back slapping and putting in the minimum is unacceptable from any organization, but especially from those entrusted to education.

It is not as if other California community colleges only abide by the minimum standard for alerts about crime.

While Los Rios was widely criticized for its response to the SCC shooting, San Joaquin Delta College in Stockton used the incident to foster open communication, asking faculty to talk to students about emergency procedures during class time.

Other colleges, including Citrus College and El Camino College near Los Angeles, have more frequent notifications than ARC.

“We really try to look at what might be meaningful and helpful to students,” said Marc Posner, public information officer for Citrus. “There are a number of instances recently, so you wonder about fatigue, but then you think ‘what if we didn’t say something?’ ”

If the administration is truly interested in creating a culture of “shared responsibility,” it should follow its own advice: “If you see something, say something.”