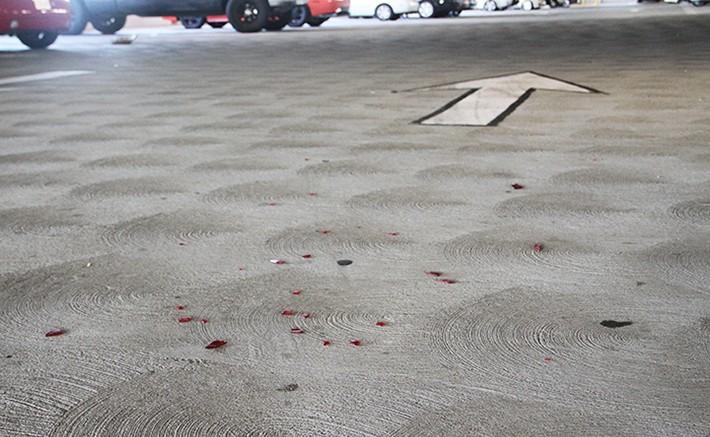 Debris remains on the second floor of the parking structure at American River College the day after a hit and run incident occurred during a police chase. (Photo by Barbara Harvey)

A police chase in the American River College parking structure Tuesday night left one pedestrian injured and several students shaken after the suspect collided with a parked car, which then rammed into a pedestrian, police said.

ARC students Chelsea Christensen, Damier Currey and Molly McGhee were walking together to their cars after class when Christensen says she noticed a suspicious man lurking on the fourth floor.

As they prepared to leave, they were stopped by Los Rios police officers, who asked if they had seen someone standing on the exterior railing of the parking structure.

“I was like ‘Oh, God,’ because I thought somebody was trying to kill themselves. I didn’t know there was a ledge down there that people could jump to,” Christensen said. “I told (the police) about the guy who was being a little weird up there. … He just rubbed me the wrong way. … I told the police and gave his description.”

As the women separated and proceeded down to the next level, they were suddenly put on high alert as they heard screeching tires.

“We heard the tires screeching,” Christensen said. “I was like ‘I gotta get out of here,’ and pulled to the side, and then a white car went zooming down past us followed by the police officer, and then as soon as they got down to the fourth floor, the police officer turned his lights on and the guy zoomed around the corner and hit a car.

“We later found out that the car slid over and hit a woman. When the (suspect’s) car stopped because it hit another car, (the suspect) got out and started running and the police officer chased him on foot with his gun drawn. Then the shuttle came down and took care of the woman.”

Officer Ryan Maxwell of the Los Rios Police Department was on the scene, and confirmed eyewitness accounts that a student was injured.

Maxwell said that the students injuries were “minor,” and that she declined treatment.

Currey, however, said the victim had appeared to be more seriously injured.

“There was a very large dent in the side of the door where (the victim) had been hit. She was hit hard. She was thrown. She was probably six feet away from the car that had hit her,” said Currey. “You could tell she was in a lot of pain.”

Maxwell said that the suspect led officers on a foot chase, abandoning his vehicle after the crash.

The Sacramento County Sheriff’s Department — including K9 and air support — was called in to assist in a search, which Maxwell estimates took an hour.

The suspect, a minor, was apprehended after being found hiding in bushes.

The suspect was booked into juvenile hall and charged with numerous crimes, including assault with a deadly weapon (non-firearm); unlicensed driving; possession of marijuana; resisting, obstructing or delaying an officer or EMT; violating probation; hit and run (injury or death); evading a peace officer in a marked vehicle; and for being a felon in possession of a firearm.

Signs of the chase, including debris from the crash, remained in the parking garage Wednesday afternoon.

Christensen said that she was shaken to learn that the suspect had been in possession of a firearm on campus.

“Knowing now that he had a gun and with all the shootings and everything happening … it does make me a little bit nervous. … I feel safe because I know how to protect myself, but you never really know what people have in their pockets,” Christensen said. “He didn’t know that I had a can of mace in mine and I didn’t know he had a gun in his. … I didn’t want to bring a can of mace to a gunfight.”

McGhee said that after overcoming her initial shock, she was relieved.

Be the first to comment on "Police chase in parking structure leaves student injured, witnesses shaken"