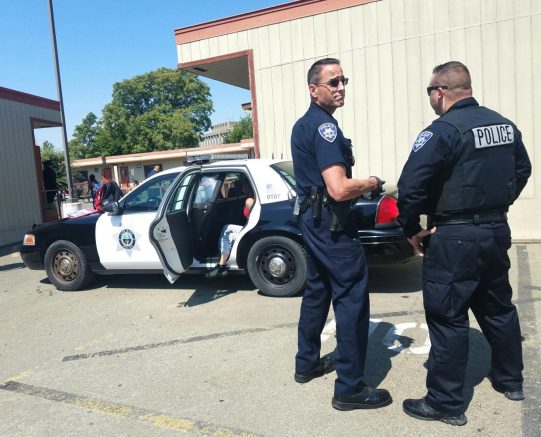 American River College’s Public Information Officer, Scott Crow spoke to the Current through e-mail. “The victim suffered minor injuries and did not require medical treatment,” Crow said. The victim provided the LRPD with names and other information.

LRPD contacted the two female students, Vida Preciado and Vivica Preciado, after conducting witness interviews. The two individuals were handcuffed and put into separate police vehicles between the Portable Village and the parking garage just before noon on Monday, August 27.

Both female students were charged with misdemeanor accounts of battery and were referred to student discipline.

Battery is classified under California penal code 242 as “any willful and unlawful use of force or violence upon the person of another.”

According to Crow and the LRPD Crime Log, Vivica was uncooperative during the investigation and pushed an officer. She was additionally charged with a second misdemeanor account of battery on a peace officer, California penal code 243 (b).

“Officers subsequently discovered this student had an additional outstanding warrant from another county. She was taken to Sacramento County Jail,” Crow said.

This story has been updated with information about the nature of the crime, the charges and the students identities.

Be the first to comment on "Breaking News: Two students charged with battery on first day of classes"