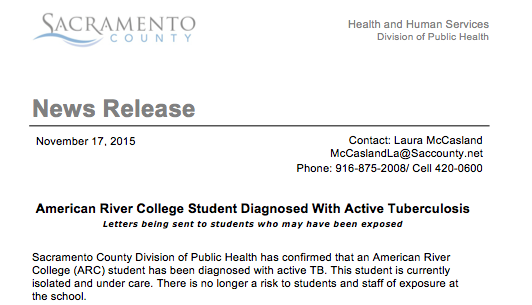 Update, Nov. 17 at 5:06 p.m.: An earlier version of this story misspelled the word tuberculosis in the second-to-last paragraph.

Update, Nov. 17 at 5:00 p.m.: This story has been updated to reflect the facts that all ARC employees have been notified of the fact that an ARC student was diagnosed with active tuberculosis, that those who may have been exposed have been notified via email, that the school might send a general notification to the student body and that tests are to take place at both the main campus and at the Natomas Center.

An American River College student is in isolation after having been diagnosed with active tuberculosis, according to an email received by the Current from the Sacramento County Division of Public Health on Tuesday.

According to Public Health’s public information officer Laura McCasland, “160 students and teachers … may have been exposed.”

Those who may have been exposed have been sent an email today through their Los Rios gmail accounts and will receive mail in the coming days, according to ARC public information officer Scott Crow.

“The email is asking for them (those potentially exposed) to be tested or screened, and the screening will take place Dec. 1,” said McCasland, who added that “you have to be in close proximity for extended period of time” to contract tuberculosis from one who has it.

The screenings are scheduled to take place at both the ARC main campus and at the Natomas Center.

Pamela Harris of Public Health said in the initial email sent to the Current that “the risk of contraction for students and staff is low.”

Symptoms of tuberculosis include a cough that lasts longer than three weeks and coughing up blood or mucus.