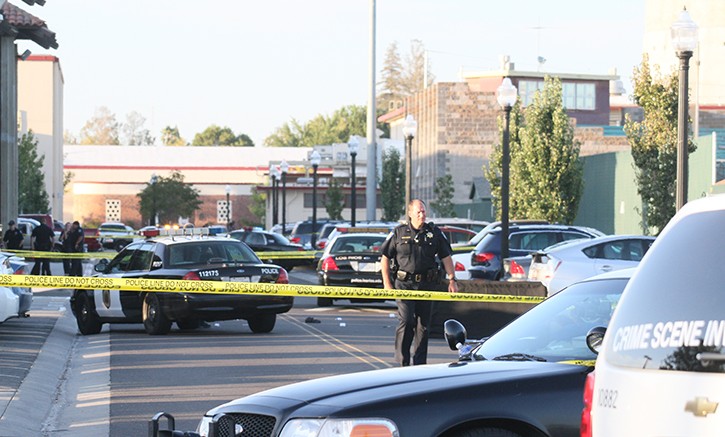 Police cars block off the scene of the fatal shooting at Sacramento City College that left one student dead and two injured on Sept. 3, 2015. (Photo by Ashlynn Johnson)

By Kameron Schmid and John Ferrannini

When Sacramento City College student Darling Perry left her biology class at 3:50 p.m. on Thursday, she decided to ride her bike to the grocery store before going home. As she neared Freeport Boulevard, she saw police cars racing toward the school with their lights on.

As it turned out, the route she normally would have taken home was the scene of a fatal shooting just minutes after she left campus.

“Usually I bike right through where it happened in the parking lot,” said Perry. “Normally, I’m right there at that time.”

The shooting, which Los Rios Chief of Police Cheryl Sears said began at 3:56 p.m., sent the campus into a lockdown, but most staff and faculty at SCC had to figure that out for themselves, rather than receiving an alert from the school.

“We didn’t know what was going on,” said Barbara Izzo, an employee at the library. “We had no communication. All I heard was ‘Oh, there’s a lockdown,’ and I had 400 students on the second and third floor.”

In most cases, students and faculty agree that the email and text alerts about the lockdown came around 4:40 p.m., roughly 45 minutes after the shooting. Those on campus were unaware of the nature of the shooting, if the shooter was on the loose and what they were supposed to do.

Biology professor Virginia Meyer said on Friday that she and a fellow professor had to call the police themselves and tell them what they knew, at which point they were told to get all the students inside their building, and lock the doors.

The only problem with that was the main entrance to Lillard Hall is set in an open position in the morning, and can only be closed and locked with both an allen wrench and the key. Meyer said the moments where they struggled to close the door were frightening.

“We didn’t know what was going on. We had no communication. All I heard was ‘Oh, there’s a lockdown,’ and I had 400 students on the second and third floor.”—Barbara Izzo, an employee at Sacramento City College’s library.

“It took us a while to figure out,” she said. “It was scary because we were trying to get students in and get them behind locked doors and safe.”

Meyer’s husband, Robert Meyer, was working in Shingle Springs when he was called by his wife and told that there was an active shooter on campus. When he learned of some of the problems the school had during the lockdown, he became angry.

“If it had been someone coming on campus to do real harm, instead of probably a gang thing, that could have been a disaster. And not having a tool to lock the door? Ditto. It’s ridiculous,” he said. 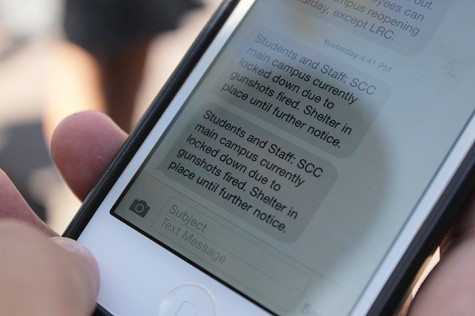 A Sacramento City College student’s phone shows a time-stamped message from the district’s emergency message system coming 40 minutes after the fatal shooting that occurred on campus began. Students, staff and faculty voiced concerns that the warning message was sent too late at the information sesssion held at the college the day after the fatal shooting. (Photo by Barbara Harvey)

All told, many on campus Friday expressed frustration at the delay between the shooting and the alert being sent out.

“I think that they weren’t prepared. You have to contact 24,000 students.”

The ALERT system is designed to inform students, faculty and staff about emergencies on campus. It is run through W.A.R.N. Command, a Tennessee based company that runs emergency alert systems.

“We were waiting for the exact, right information,” said Brewer. “We were not about to put our erroneous information just to be wrong.”

Brewer said that once the credibility of the shooting was established, Los Rios Chief of Police Cheryl Sears was informed and she decided with Laduan Smedley, the vice president of administrative services, to put the school on lockdown and told him to send out the alert.

“It takes a few minutes. This is not something that takes seconds,” said Brewer. “I called the company that does the alerts and dictated the message and they sent it out at the earliest available time.”

Crow said that students can sign up for the ALERT system when they apply to a Los Rios college, when they fill out their supplementary enrollment form before each semester or at any time through their eServices accounts.

Messages can be tailored to particular campuses or even groups of people on campus. Even students who do not sign up to receive text messages receive similar alerts on their Los Rios Gmail accounts.

“It really depends on the situation,” said Crow. “There are different lists (for) day students, night students (and) different places.”

According to data kept by the district, the system was used for “serious” messages four times between April 2014 and Thursday’s shooting.

Only one of these was for American River College, when in January, students, faculty and staff at the Natomas Center were informed about an individual with a weapon in the area.

Chief Sears agreed with Brewer’s assessment of why it took 45 minutes to send the text message alert.

“We waited until we had a specific fact to send out,” she said.

Not everybody got the alert at the same time, according to Sears.

“Some people got the email first, some others got the text first. And people got the alerts at various times,” said Sears. “When you’re relying on technology, it’s hard.”

Barry Kalar, an administration of justice professor at SCC, agreed that relying on technology brings its own challenges. He said he was informed of the shooting around 4:40 p.m.

“The problem is that when I’m teaching, I’m not looking at my phone,” said Kalar. “One of my students got it on her phone and said ‘Oh my God, we’re in lockdown.’”

Los Rios Chancellor Brian King said that the speed of the ALERT system was something he intended to look at.

“It’s never quick enough,” said King. “The need to get the response out quickly is there, so that’s one of the things that we’ll examine. What can we do to speed that process?”