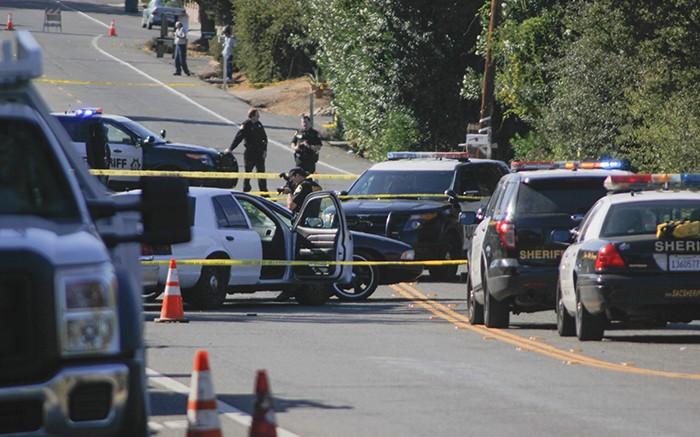 A police officer photographs the scene of a shooting that left one man dead on Cypress Avenue near Garfield Avenue on Thursday. Adrienee Ludd was killed by police during a confrontation, although he did not fire his gun. (Photo by John Ferrannini)

Update, Feb. 25, 2016 at 5:43.: An earlier version of this story incorrectly spelled Adriene Ludd’s name as Adrienne Ludd. This led to his name not showing up in the ARC database when his name was searched to verify that he was a student at ARC. Ludd did attend ARC.

Update, Oct. 26, 2015 at 2:54 p.m.: This story has been updated to reflect that Adriene Ludd was not an American River College student, in spite of the fact that his Facebook page claims he studied there.

The man shot and killed by police after a confrontation Thursday on Cypress Avenue never fired his gun, according to the Sacramento County Sheriff’s Department, in spite of initial reports that he was killed after firing on police officers.

It was initially believed that Adriene Ludd, 36, had fired his gun, according to Tony Turnbull, the public information officer of the Sheriff’s Department.

“It appears that his gun was non-functional because of a possible double-feed of the ammunition in the chamber,” said Turnbull to KCRA-TV News.

Ludd did have another gun on his person, according to Turnbull.

According to Sheriff Scott Jones, police tried to pull Ludd over at Manzanita Avenue and Winding Way around noon Thursday, but he sped away.

“(Ludd) sped through the streets, going through stop signs without stopping (and) driving in a dangerous manner,” Jones said.

In his initial statement hours after the shooting, Jones said that on Cypress, Ludd stopped the car and used it as a barricade as he fired at three police officers.

“The officers … returned fire on the subject. The subject went down,” Jones said. “The gun fell out of his hand and went some ways away. That subject started crawling quickly toward the weapon. Still sensing a threat, the officers again opened fire. For a time after that, the subject lay motionless on the ground.

“It’s one thing for somebody to be in a situation they find themselves in unexpectedly and they have a high level of desperation … But at some point it appears there was some calculation involved and ‘How am I going to get out of this?’ and his decision was not to continue to pursuit but to stop and try to kill the officers.”

Ludd, who had served prison time, was pronounced dead.

“He has an extensive criminal history going back at least 20 years for such crimes as narcotics, weapons, including assault weapons, auto theft, burglary, possession of stolen property (and) a multitude of different felonies,” Jones said.

None of the officers were injured, in spite of initial reports that one may have been injured from a grazed bullet.

The officers involved are currently on administrative leave, as is the policy for officer-involved shootings.

Ludd’s Facebook page states that he attended American River College. School officials said Monday that they found no record of him attending ARC.

Barbara Harvey contributed to this report.