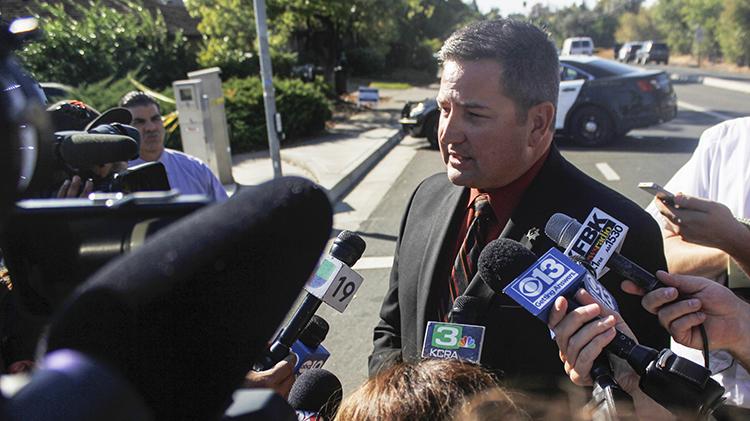 Sacramento County Sheriff Scott Jones spoke to the press Thursday at the scene of a shooting that left one dead less than two miles from American River College. The deceased man shot at three police officers, who returned fire, said Jones. (Photo by Kevin Sheridan)

Update, Oct. 24, 2015 at 11:58 a.m.: In spite of the initial statements from Sheriff Scott Jones reported in this article, the Sacramento County Sheriff’s Department said Friday that Adriene Ludd, 36, never fired his gun at the police. Read an updated version of this story here.

Update, Oct. 22, 2015 at 5:29 p.m.: This story has been updated to include information available in a press release from Sheriff’s spokesperson Tony Turnbull.

A police shooting that left one man dead shut down a section of Cypress Avenue on Thursday afternoon, less than two miles from American River College.

Sacramento County Sheriff Scott Jones said during a press conference at the scene that an unidentified 36-year-old man was killed by police after he shot at officers attempting to perform a traffic stop for expired registration.

According to Jones, police tried to pull the man over at Manzanita Avenue and Winding Way, but he sped away.

“(The man) sped through the streets, going through stop signs without stopping (and) driving in a dangerous manner,” Jones said.

During the pursuit, the man stopped to allow a passenger to leave the car. The passenger left the car with his hands in the air according to a statement released Thursday evening by Sacramento Sheriff’s Department spokesperson Tony Turnbull.

After speeding away from the police a second time, on Cypress the man stopped the car, got out and used the car as a barricade as he fired at three police officers.

“The officers … returned fire on the subject. The subject went down,” Jones said. “The gun fell out of his hand and went some ways away; that subject started crawling quickly toward the weapon. Still sensing a threat, the officers again opened fire. For a time after that, the subject lay motionless on the ground.

“It’s one thing for somebody to be in a situation they find themselves in unexpectedly and they have a high level of desperation. … But at some point it appears there was some calculation involved and ‘How am I going to get out of this?’ and his decision was not to continue to pursuit but to stop and try to kill the officers.” 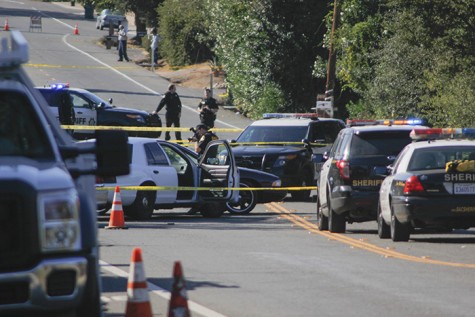 A police officer photographs the crime scene on Cypress Avenue near Garfield Avenue on Thursday. (Photo by John Ferrannini)

The man, who had served prison time for a criminal record, was pronounced dead.

“He has an extensive criminal history going back at least 20 years for such crimes as narcotics, weapons, including assault weapons, auto theft, burglary, possession of stolen property (and) a multitude of different felonies,” Jones said.

One of the officers has an injury, although Jones said it’s unclear at this time whether the injury was caused by a grazed bullet or something unrelated to the altercation.

The officers involved are currently on a standard administrative leave.

Jones said that although the sheriff usually doesn’t personally address the press following incidents, he decided to do so considering the “incredible series of events that took place on the street behind me.”

“We’re incredibly fortunate,” Jones said. “The tenor of this press conference could have been far different.”

Los Rios colleges have “no plans” to give bachelor’s degrees