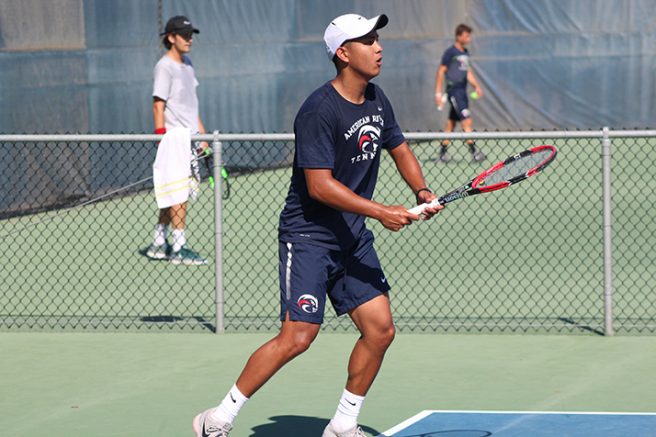 De Anza’s road to the final included wins over No. 8 Solano and No. 5 Folsom Lake, while ARC took on No. 7 Fresno and No. 3 Foothill en route to the championship.

The matches started well for the Beavers, winning the first two doubles matches with relative ease at 8-2 and 8-3.

The No. 2 ranked match was stressful however as Paul Bhatia and Pete Gibson fell behind early on 4-5. However, the team managed to pull out the win 8-6 and send the Beavers into singles play up 3-0.

“It just changes the dynamic, of the whole match. You go into singles up 3-0 as opposed to being up 2-1 or even down 1-2,” Jabery-Madison said. “It definitely puts their backs against the wall and gives us a nice lift going into singles for sure. Huge to get that 3-0 score.”

In singles play, most matches were closely contested and some looked to be heading towards a third set tiebreaker. 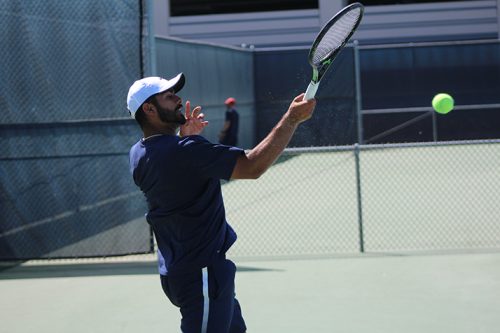 Freshman Paul Bhatia swing at a ball during a match against De Anza College on April 21 at American River College. Bhatia and ARC won the game 5-0 to win a third straight NorCal title.

Sophomore Michael Vizcarra said that the team’s energy and support of each other gives them the energy to get through tough matches.

“The support is a big thing in our team. When one yells, we all yell and that that’s the type of energy that flows through when you’re so tired that really pushes you forward,” Vizcarra said.

Robert Kendall beat Mariano Sigifredo 6-1, 6-2 to get the fourth win of the day, meaning the Beavers only needed one more win to three-peat as champions.

Ultimately Vizcarra was able to deliver that clinching win, as he beat Aditya Goyal 6-1, 6-4 to give ARC the NorCal title.

After the game Kendall said that the team spirit and culture made playing enjoyable compared to playing singles.

“In tennis usually outside of the school you don’t have a team environment, so in this situation you’re able to rely on your teammates and your coaches are basically right on the court with you,” Kendall said. “In regular tennis, you don’t have that option; you’re by yourself.”

With the win, the Beavers will face the Southern California champions Cerritos College in Ojai on April 25 to decide the state champion and, according to Vizcarra, they have a big task ahead of them.

Jabery-Madison also said that it will be a tough matchup, but that he likes the challenge.

“It will be a lot of fun. It’s always a good challenge for us. We’re definitely going to go in there as the underdogs on paper, but we like that role and last two times that we’ve been there, even though we lost, we’ve probably played the best match of our seasons both times,” Jabery-Madison said. “I know we’re going to bring it.”