American River College guard Jermaine Henderson shouts instructions to his teammates during a game against Santa Rosa Junior College on Jan. 27 at ARC. ARC won 68-57 to get its 12th win of the season. (Photo by Mack Ervin III)

Sophomore guard Richard Reed, scored half of the points for American River College’s men’s basketball team and led the team to victory against Santa Rosa, on Friday with a final score of 68-57.

Freshman Baidi Kamagate scored 12 points, the second highest amount of points. Although he produced for his team and played a strong game, Kamagate says he experienced nerves and stress during the game.

“I was stressing today,” Kamagate said. But, he added, he looks toward future games.

“I am focused on getting better [at ARC] and I will let coach teach me,” Kamagate said. 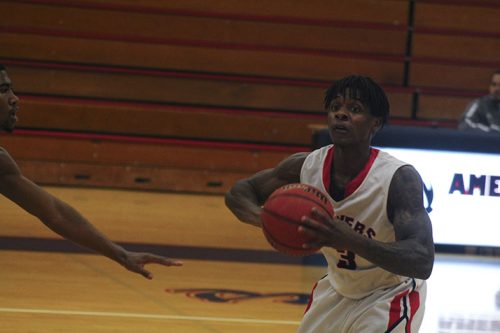 American River College guard Richard Reed passes the ball to a teammate during a game against Santa Rosa Junior College on Jan. 27, 2017 at ARC. Reed put up 35 points as the Beavers won 68-57. (Photo by Mack Ervin III)

ARC lost to Santa Rosa the last two times the teams played each other. This was a definite comeback for the Beavers.

“There was no quit tonight defensively,” Coach Mark Giorgi said.

The Beavers led by more than 10 points throughout the entire game.

Although the proof is in the end score, there was more than just skill and talent that went into the successful victory for the men’s team.

Something that brought them a long way was their teamenship.

Reed said, “I do what I can do on the floor to help my teammates.”

There was also a sense of comradery on the court that night. All of the benched players cheered on the starters and the coaches offered words of encouragement for the men.

The Beaver’s next game is at Diablo Valley on Tuesday at 7:30 p.m. and the women’s team will play before the men at the same location at 5:30 p.m.