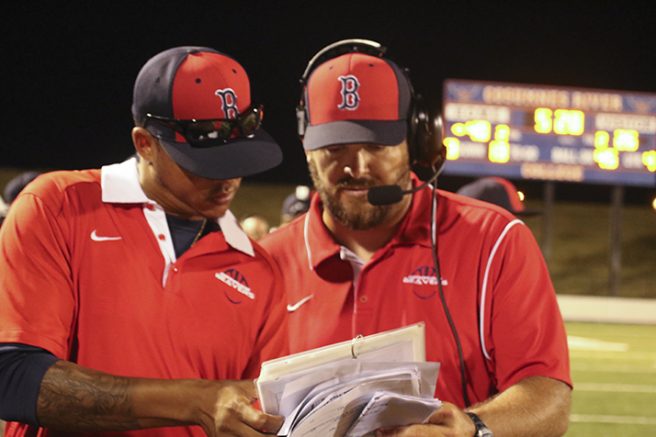 Despite a late comeback attempt, American River College’s football team was able to hang on and defeat Modesto Junior College 47-33 on Saturday at Cosumnes River College, extending their record to 2-0 on the season.

The Beavers, ranked first in Northern California and fourth in the state, were forced to play at CRC due to playing surface at ARC not being in good enough condition.

Coach Jon Osterhout said that they were displaced by the construction of the new soccer stadium, but it was a sacrifice the team made so that the soccer teams have a “first class facility.”

“We all knew that we were gonna pay a price, the soccer team’s have been practicing off campus and at other schools,” Osterhout said. “Everybody’s been displaced but we have a first class facility now.”

MJC started the game well with a strong 85-yard drive ending in a touchdown for running back Jay Green, and with their defense forcing ARC to turn the ball over on downs.

The Beavers quickly bounced back with a 98-yard touchdown pass to wide receiver Damen Wheeler Jr. and tied the game at 7-7.

Freshman quarterback Griffin Dahn, starting in place of the injured Chris Guillen, settled in with the first team offense and found Wheeler Jr. again for a three-yard touchdown on their very next drive to take the lead. 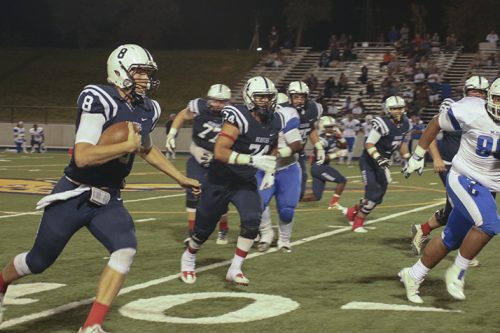 ARC’s defense was also busy throughout the game, racking up 74 tackles and four sacks against the Pirates’ offense.

Defensive lineman Anthony Luke had one and a half sacks on the night and said the defense were really on the same page.

“The defense was great. I think we all came together and executed this week,” Luke said. “We put a huge emphasis on linemen assignment and I think it showed tonight.”

Luke also pointed out the differences between facing Modesto this season, and last season where they lost 41-10.

“Last year they gassed us because we were out of shape but this week Coach O prepared us and had us do a lot of conditioning for this game and we were ready for them,” Luke said.
Four of ARC’s six first half drives resulted in touchdowns with Dahn racking up three touchdowns and 270 yards through the air, along with a rushing touchdown at halftime, leaving the game well in ARC’s favor 29-13.

The third quarter was a defensive showdown, as the only score came from an ARC field goal on their opening drive to extend their lead to 19 points.

Miscues by ARC in the third and fourth quarter including a failed fourth down conversion and an onside kick from MJC allowed the Pirates to close the gap to 7 points with just over four minutes remaining.

Coach Jon Osterhout took the blame for the decisions leading up to those miscues.

“I made two terrible calls. The kicker had a choice to either kick or run and he chose to run. It was a bad call and I shouldn’t have put him in that position,” Osterhout said.

“I didn’t have the right personnel out here for the onside kick. We were sweating bullets there for a little while, but like last week, these situations are gonna pay dividends for us and we’ve been in these types of environments. Today we had the upper hand and last week we were behind.”

Dahn said that while their game slipped in the second half, they were able to pick it back up.

“I felt like we had a great first half and then we got a little too lackadaisical in the second half, but as soon as it got a little close we started to pick it back up,” Dahn said.

The Beavers suffered a three-and-out on the next drive, but were given a lifeline after MJC’s punt returner muffed the catch and allowed ARC to recover in Modesto territory. 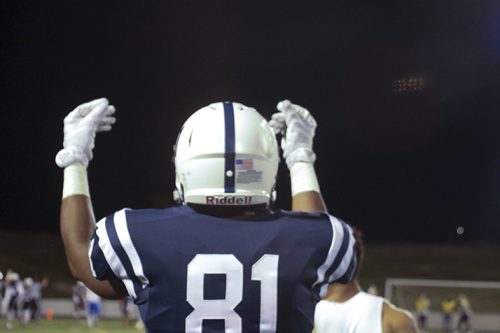 Three rushes from Ce’von Mitchell-Ford put them on the goal line, where Dahn was able to sneak the ball in for his third rushing touchdown, leaving him with six touchdowns overall as ARC beat Modesto 47-33.

Osterhout said that the team performance was good and they executed their gameplan well.

“I feel great about it (the team performance) we put a lot of practice and effort into it over the course of the week. After the game against DVC we immediately went to work for tonight,” Osterhout said.

“We had a really good game plan in all phases and the guys went out and executed it. I couldn’t be more excited to get a win in what is essentially a road game at CRC.”

Wheeler Jr. said that they played well, but that they have to remember not to ease up down the stretch.

“We did great we just gotta make sure next time not to let up and play a full game,” Wheeler Jr. said. “I felt like we did great tonight.”

Osterhout said that the team should be back on their home field next week.

“From what I’ve gathered, we’ll be back to playing on our own turf next week,” Osterhout said. “It’s a great environment and we’ll be welcoming the state champions at our house for another great matchup with the City College of San Francisco.”

“As far as I’m concerned, that’s where we want to be and we just needed to give that grass two weeks to grow. The grounds on campus did a phenomenal job to get the topsoil down and we’ll be ready to go.”

1 Comment on "ARC holds off comeback attempt from Modesto, wins 47-33"