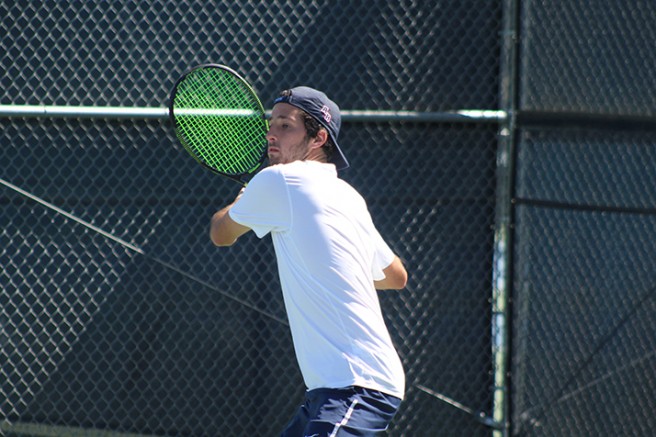 American River College's TJ Aukland prepares to swing at a ball during a game against Santa Rosa Junior College on March 15, 2016 at ARC. Aukland and his partner Cody Duong won the game 8-1.(Photo by Mack Ervin III)

American River College’s men’s tennis team closed out its season with a 17-4 record, including a flawless 10-0 in conference and bringing home the Big 8 Conference championship and the NorCal Championship.

The Beavers only dropped a total of eight matches throughout the Big 8, earning them the No. 1 seed for the NorCal tournament. Their only losses this season were to teams from southern California, including NCAA Division I school Fresno State.

After winning the NorCal Championship, the team traveled to Ojai to take on Irvine Valley College in the State Championship, but fell to the Lasers 5-1. 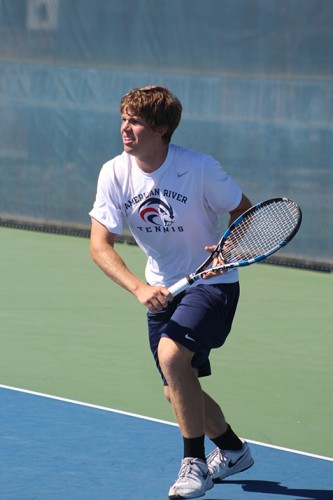 American River College’s Justin Barton prepares to return a ball during a game against Santa Rosa Junior College on March 15, 2016 at ARC. Barto and his partner Elias Burbick won their match 8-4. (Photo by Mack Ervin III)

Coach Bo Jabery-Madison said that he was proud of the group and their accomplishments and how far they came over the course of the year.

“Our season is a success no matter what,” Jabery-Madison said. “We’ve worked hard and had a lot of positive outcomes, but more importantly we’ve improved a lot and I think that’s the goal.”

Justin Barton said that it was great to see all of the team’s hard work paying off with the season that they’ve had.

“It feels amazing,” Barton said. “We put in a lot of hard work and prepared really well and I thought we came out here and put it all on the line and really fought.”

Jabery-Madison said after the NorCal title win that it is too early to judge what next year’s team may look like.

“Every year is so different,” Jabery-Madison said. “Some years we had the talent, but not the health or some teams have overachieved and you’re happy with what you got rather than what you could’ve done.”

Capaul, who won the clinching match in the NorCal title game, said that while he won’t be on the team next year, he will still be around.

Engineering Club to compete after 30 years