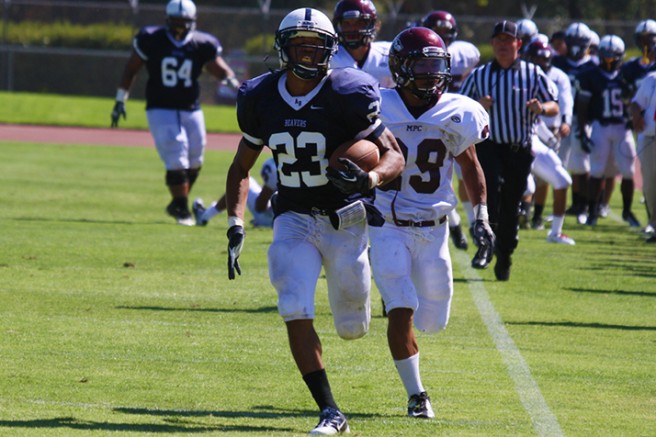 Former ARC RB Devontae Booker is considered to be one of the top backs in this year's draft, and CBS Sports projects him to be a late 2nd-early 3rd round pick. (File Photo)

Former American River College running back Devontae Booker could find out which NFL team he will be playing for next season during the 2016 NFL draft this weekend.

Booker is one of hundreds of hopeful college football players vying to be one of the 253 players selected in the draft who get the chance to prove themselves in the NFL.

This year the draft will be held in Chicago, and all 32 teams were assigned picks based on their win-loss record and playoff positions. The selections will be split over seven rounds.

All rounds will be televised by ESPN, with the first round on Thursday, the second and third rounds on Friday and the fourth through seventh rounds on Saturday.

Booker played his first two seasons at ARC, racking up 1472 yards and 15 touchdowns in his senior season before transferring to the University of Utah.

Booker sat out a year after an incident allegedly involving a forged transcript at ARC, but returned to the Utes in 2014, amassing 2,773 yards and 21 touchdowns over two seasons before a torn meniscus cut short his senior season.

He is considered to be one of the top running backs in this year’s class and is projected by CBS Sports to be the third back drafted, putting him somewhere around the second or third rounds.

He was unable to do any workouts at the Scouting Combine except for the bench press, but held a workout for NFL scouts at Grant Union High School, where representatives from 18 teams attended, including the running back coaches from the Seattle Seahawks and the Oakland Raiders.

Booker would be the first football player drafted out of ARC since cornerback Coye Francies, who went in the sixth round of the 2009 NFL Draft.

Don’t buy into the vaping industry