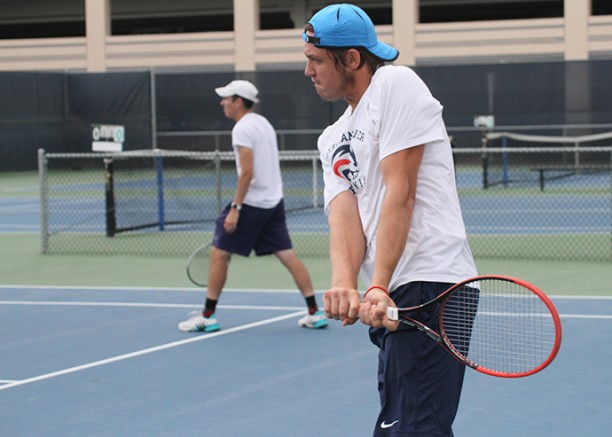 American River College men's tennis players Alex Meliuk (front) and Seppi Capaul (back) play a doubles match during the NorCal Semifinals against Chabot on April 12, 2016. ARC won the match 5-0 and moved on to the next round of playoffs. (Photo by Matthew Nobert)

American River College’s men’s tennis team ended their season yesterday with a loss to Irvine Valley College in the state championship, by the score of 5-1.

Seppi Capaul and Alex Meliuk got the team’s only win in a doubles match against Irvine Valley’s Sam Cohen and Javi Callejo, with a score of 8-3.

Irvine Valley finished 21-2 on the season, winning their last 16 games of the season and their only losses going to NCAA Division 1 schools.

American River closes their season with a 17-4 record, with all their losses going to southern California schools, including Division 1 school Fresno State.

All ARC players playing in the Ojai Individual Tournaments have byes to the next round, which starts Friday, April 22.