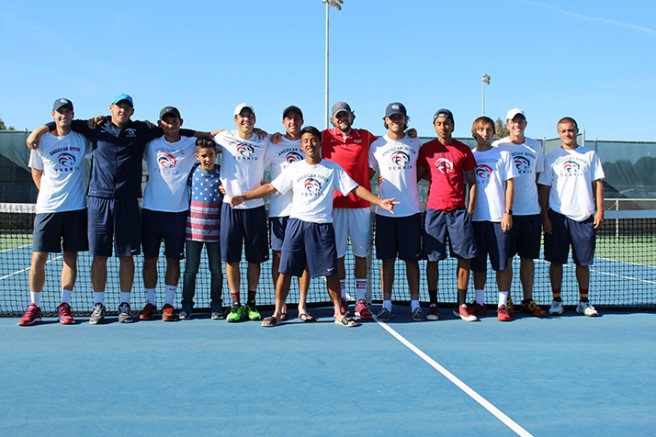 The American River College men's tennis team pose for a picture after beating Foothill College 5-2 to become NorCal Champions on April 16, 2016 at ARC. This team was the first NorCal Champions from ARC since 1966. (Photo by Mack Ervin III)

The No. 1 ranked Beavers entered the match undefeated in tournament play, but were in for a challenge as Foothill came out strong in doubles play, forcing the first game into a tiebreak.

ARC players Seppi Capaul and Alex Meliuk were able to rally back from a 7-5 deficit against Braden Holt and Igor Pissarenko to tie it up at 8-8, before winning the tie breaking set 7-5. 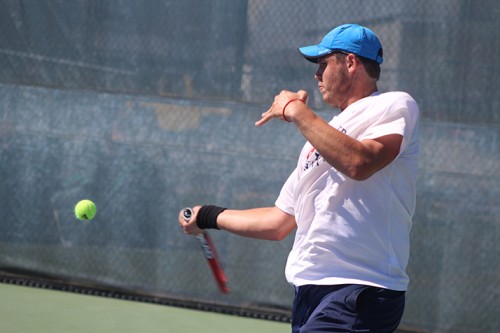 American River College’s Alex Meliuk hits a ball during a game against Foothill College’s Igor Pissarenko at the NorCal Tournamet Final on April 16, 2016 at ARC. Meliuk won the match 6-0, 6-3 as ARC went on the become NorCal Champions. (Photo by Mack Ervin III)

Justin Barton and TJ Auckland struggled to break the serve of their opponents on court three, before finally breaking through in the penultimate set, winning 8-6.

Cody Duong and Sean McDaniel had similar struggles on court two, but ended with the identical result of 8-6.

Entering singles play, the Beavers only needed two more wins to lock up the crown and got one early from Meliuk, while Auckland and Dylan King dropped their games, allowing Foothill to close the gap.

However, their hopes were dashed as Capaul finished off Jacob Strabo 6-3, 6-1, winning the title as teammates and coaches surrounded him to celebrate their historic win.

Barton said that it was a great feeling to be part of such a run and relished his time on the court.

“It feels amazing,” Barton said. “We put in a lot of hard work and prepared really well and I thought we came out here and put it all on the line and really fought.”

“It means a lot to me. I only played one doubles match but it was a close one and one more game towards the championship so it was a great feeling.” 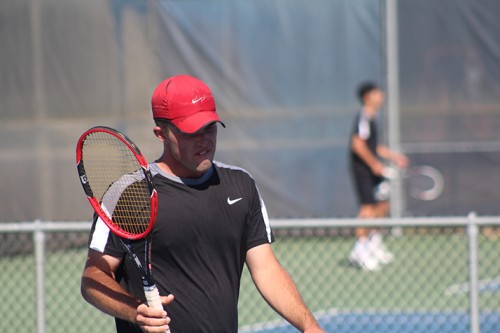 Foothill College’s Braden Holt reacts after missing a shot during a match against American River College’s Cody Duong at the NorCal Tournament Final on April 16, 2016 at ARC. Holt lost the match 6-4, 5-3 as ARC went on to become NorCal Champions. (Photo by Mack Ervin III)

With the state championship against SoCal champions Irvine Valley College set, King felt like the team could win it all if they continue to put in the effort.

“We got Ojai next and we’re going for it baby,” King said. “The last team to be NorCal champions in 1966 won the state championship so I think if we put in the work, which we already have, I think we can do it.”

Coach Bo Jabery-Madison said that he was proud of the group and their accomplishments and how far they came over the course of the year.

Jabery-Madison also said that the competition will be tougher now that they will play a SoCal team.

“Now we have our hands full because it only gets tougher,” Jabery-Madison. “There’s a lot of close matches that we would like to have back and whether that’s against Cerritos or Irvine Valley, it’s gonna be a great challenge for our guys.” 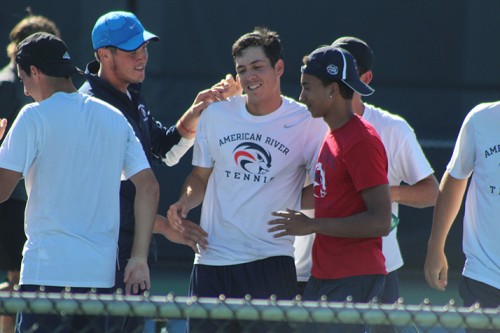 ARC hosted a packed house full of family, friends, and alumni of the team including former coach Ralph Freund, who were there to cheer on the current crop of players.

“It’s amazing,” Jabery-Madison said. “He (Freund) was my coach and he retired after my first year and I still have a great relationship with him even 20 years later.”

Jabery-Madison also took the time to single out Capaul for his performances and sacrifices for the team after accepting a less prominent role in the team for his sophomore season. 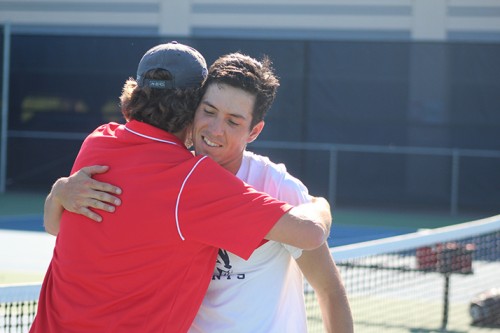 Capaul acknowledged that he may have fallen off a bit compared to the last year, but was happy to win for the team.

“Last year I probably felt better in the sense that I did better in single and doubles compared to this year but it’s a good feeling to win it for the team and make a little history in the making.”

Capaul also said that the team will have to step their game up for the match against Irvine Valley if they are to win.

“The southern schools take it to another level so we’re gonna have to take it up another gear and then some because it’s going to be more difficult playing them,” Capaul said.

“We need to build upon the last few weeks where the team has been playing more consistently and smarter and then trust what we’ve done so far,” Capaul said. “When it comes to crunch time, have confidence in your faith and your shots.”

ARC will play for the CCCAA state championship against Irvine Valley on Wednesday, April 20 at Ventura College at noon.