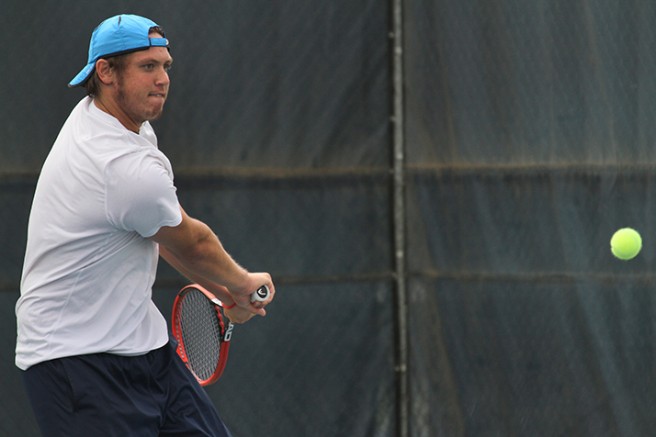 American River College men's tennis player Alex Meliuk looks to return the ball during one of his matches at the NorCal Semifinals against Chabot on April 12, 2016 at American River College. Meliuk left Belarus at age 19 to come to the United States for more opportunities. (Photo by Matthew Nobert)

The trip from Belarus to Sacramento is over 5,000 miles, and American River College tennis player Alex Meliuk made that trip last year to start a new life in the United States and create more opportunities for himself.

“Life there is different, there are more opportunities here,” Meliuk said.

Meliuk left Belarus, which is on the western border of Russia, when he was 19 on a recommendation his older sister gave him. She was playing tennis for California State University, Sacramento (CSUS) at the time.

While Meliuk was playing in Belarus, he was one of the top ranked players in the country and won the under-16 national championship of Belarus in 2012.

Meliuk has now lived in the United States for a little over a year, but didn’t join the team until this year and has quickly become one of the best players on the team. Meliuk is so far undefeated in singles play.

One of his fellow teammates and current roommate Seppi Capaul has grown a good chemistry with Capaul and enjoys the level of talent that Meliuk brings to the team. 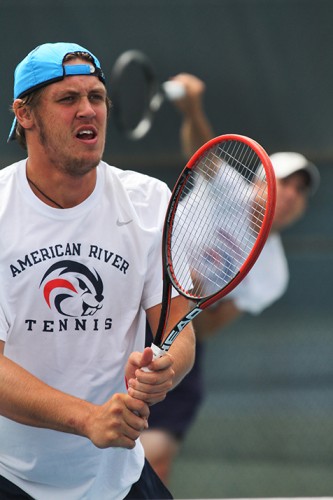 American River College men’s tennis players Alex Meliuk (front) and Seppi Capaul (back) play a doubles match during the NorCal Semifinals against Chabot on April 12, 2016. ARC won the match 5-0 and moved on to the next round of playoffs. (Photo by Matthew Nobert)

“We have a good chemistry and we have fun out there,” Capaul said. “You get more experience playing with different teammates and he is one of the more aggressive ones with a big serve, so it kind of forces me to play a better defense.”

Coach Bo Jabery-Madison has really enjoyed coaching Alex and seeing his talent grow, but also learning more about Meliuk and what life was like back in Belarus.

“I think you learn about the culture just by watching him and being around him which is really neat,” Jabery-Madison said. “That’s a different world than I have ever known.”

With English being a second language for Meliuk, Jabery-Madison began picking up on certain signs to help him know that what he was teaching him was getting through.

Overall both Capaul and Jabery-Madison said that Meliuk is a very fun guy to be around off the court, but when it’s time to play that is all he is focused on.

As of now Meliuk has no plans of moving onto the professional stage and is just focusing on succeeding in school and winning every match he has this season.

“I mean we will see how it goes, but first of all I want to finish school,” Meliuk said.