While the team is virtually assured of getting another home game at some stage in the playoffs, for now they will only be able to practice at ARC.

The Beavers took all except one game in straight sets, while Troy Carlsen took three sets in order to dispose of his opponent, eventually winning 3-6, 6-2 and 13-11.

Sophomore Seppi Capaul got off to a seemingly slow start, going down 2-4 in the first set, before rebounding and going on to win 6-4 and 6-0.

“Everyone in general did pretty well. Myself, I did so-so,” Capaul said. “Got down a couple of breaks in the first set and had too many unforced errors.”

Capaul said that playing at home really does make a difference and is an advantage for the Beavers.

“There’s a home advantage when you’re used to playing on your own court,” Capul said. “When you play away, it takes a little warmup to get adjusted to not only the weather conditions, but also to the speed of the surface.” 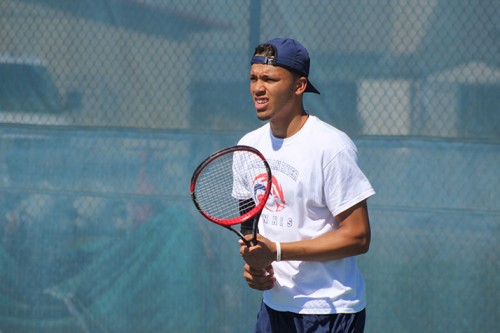 Head coach Bo Jabery-Madison agreed that playing at home does have benefits.

“First of all we have great facilities,” Jabery-Madison said. “It’s nice to play on these courts and we know how they play. Different courts play at different speeds.”

ARC will now play in the North/South tournament in Fresno against some of the best teams from northern and southern California, including NCAA Division I school, Fresno State.

Jabery-Madison said that while the team is playing well in conference, it is important to be tested by tougher schools and really push yourself to go the extra mile.

“Aside from DVC (Diablo Valley College), the matches in the conference aren’t very competitive. We need matches like this to see where we’re at and get tested.”

Freshman Cody Duong said that now that the post-season is on hand, it is important to take the playing level up a notch.

“We always try to kick it into a new gear every time we go to the next level,” Duong said. “We compete as hard as we can and that’s all that we can ask for.”

The North/South Tournament starts on March 18th in Fresno.