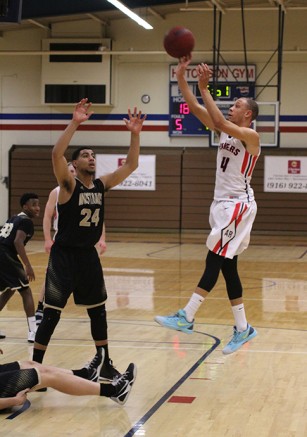 Former ARC guard Jarvis Watkins takes a shot in last seasons game SJDC on Jan.27,2014. This season ARC is finding itslef lacking expeiernce and has had a bummpy start with a 4-6 record.

The ARC men’s basketball team is lacking in experience, with some players not even having played in high school. But head coach Mark Giorgi feels that good chemistry between the players and a willingness to improve will be key to having a strong and productive season.

ARC is currently 4-6 on the season, having some good wins and some bad losses. One of those big wins came in their game against Irvine Valley (7-2) with a 61-60 win.

“We’ve got some good wins but we’re not doing as well as we could,” said team captain Austin Lobo. ”But I think the wins that we have we’ve shown potential going forward in league.”

Because of the team’s inexperience, it’s pretty much the basics that Giorgi wants to work on, being that he is getting a lot of raw talent from his less experienced players.

“We’re just fighting through the concepts of learning how to play basketball,” said Giorgi. ”Playing it with the ball, without the ball, that kind of stuff.”

The team started the season playing an up-tempo style of play. But Giorgi says they have since slowed the tempo down.

“We scored 101 (points) our first game and since then we’ve been slowing it down,” said Giorgi. ”The guys who were making shots early haven’t been making shots, so we’re trying to identify who we want to get our shots.”

The team’s leading scorer and co-captain sophomore Marcellus Perry believes that the team is still getting to know each other and is still trying to develop team chemistry.

“We’re trying to get everything together, get everybody acquainted with each other and build chemistry,” said Perry. ”Come league we’ll be straight.”

The team’s other co-captain Maalik Hazziez thinks the team is good and can compete with anyone. Like Perry he believes the team is still in the “feeling out” process.

“We’re definitely getting better,” said Hazziez. ”Everyday is a process and every game we’re learning something so we don’t make the same mistakes we’re making.”

Coach Giorgi thinks the team needs to play a whole game with the same mentality to advance.

“I don’t think we fight enough for me, we’re not resilient enough for 40 minutes,” said Giorgi.

The team will get it’s next test of strength December 17 against Marin College at the Santa Rosa tournament.