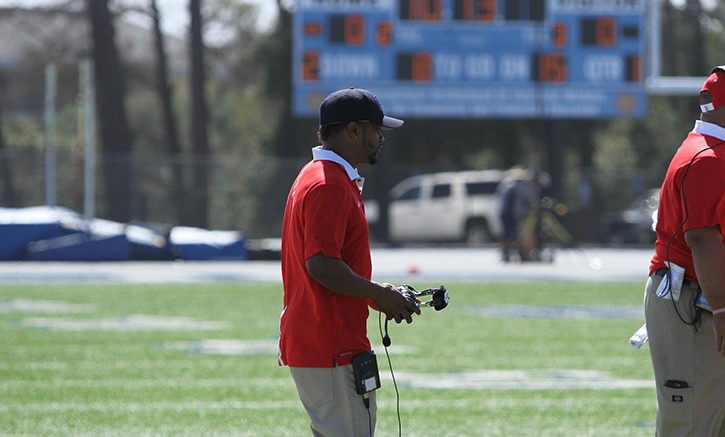 Coach Wheeler walks onto the field during a time out during American River College's 42-10 loss to College of San Mateo on Saturday, Oct. 3, 2015. (Photo by Barbara Harvey)

Former NFL corner Damen Wheeler has become quite accustomed to the defensive backfield he coaches at American River College.

Wheeler was drafted in the sixth round by the San Diego Chargers in 2000, but did not survive the team’s final roster cuts for that season and did not play a down for San Diego.

He signed with the Jacksonville Jaguars before the 2001 season. In just one season in Jacksonville, Wheeler appeared in five games and recorded 12 tackles.

After graduating from Valley High School in Sacramento, Wheeler went on to star at the University of Colorado where he started as a true freshman and went on to start all four years.

At Colorado, he had eight interceptions, including one returned for a touchdown in his time there.

In the spring of 2001 Wheeler signed with the New Jersey Hitmen, a team in the short-lived XFL, where he recorded three interceptions.

His final stint in football was with the Los Angeles Avengers of the Arena Football League from 2002 to 2008.

After his career ended, Wheeler decided to try his hand at coaching.

ARC head coach Jon Osterhout afforded him the opportunity at the end of the 2014 season to coach its defensive backs.

“I love kids and kids respond to me well,” said Wheeler. I think I do what I do well so I just wanted to give back.”

Wheeler said he is encouraged by this year’s defensive backs unit.

Led by freshman cornerback Josh Huston and sophomore safety Robert Sanders, Wheeler said he has been impressed with their play as well as their attitude so far this season.

His players not only respect his football acumen but also appreciate him as a person.

“He’s a very funny dude and he knows how to make football interesting. He’s a dude with a lot of knowledge and we just have to utilize it,” said Sanders.

“Wheeler is my dude, he’s a great coach. He’s going to help you get through it, good or bad,” said Houston.

Although Wheeler said he is impressed with this year’s squad, he also said he feels that there is always room for improvement.

“We’re younger (this year) but I think we’re better. We’ve got more size and the kids this year seem to be a little more coachable,” said Wheeler. “We cover very well, we just need to tackle better. We try to get too physical, try to make big hits instead of sure tackles.”