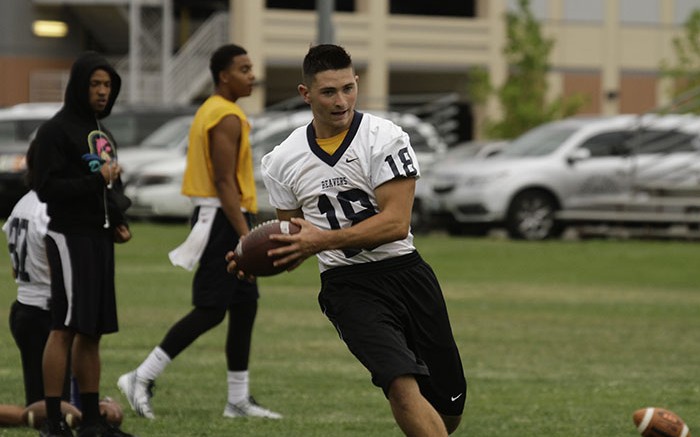 ARC wideout Will McClure puts his route running skills on display during Summer training camp. Heading into 2015, ARC will try to build on a season that ended with a 17-14 loss against the Community College of San Francisco.

After a 2014 season that started with an eight-game winning streak and ended with a loss in the NorCal championship game, ARC’s football team is back on the field with new faces, new coaches, and the same desire to succeed as it prepares for the 2015 season.

Head coach Jon Osterhout’s second training camp began on July 1, and the team met every Tuesday, Wednesday and Thursday until July 30 before the regular season practice schedule kicks in on Aug. 11.

The team started camp with returning players from 2014, transferring students, and new recruits that graduated high school this past spring.

“It sounds very cliche, but we just want to do something with a purpose,” said head coach Jon Osterhout, now entering his second season as the team’s head coach.

“We can’t wait to get started.”

2014 starting quarterback Tanner Trosin signed a letter of intent to play for Southern Oregon University, leaving the starting job as well as many others on both sides of the field open and for the taking.

Osterhout said the team has about 10 quarterbacks on its roster at this time as they go through camp.

The team carried six during the 2014 season.

“We’re trying to find the best student athlete to fill the requirements of our football program,” Osterhout said.

Christopher Guillen, who graduated from Christian Brothers High School in 2015, is one of the 10 vying for the starting position.

“It’s a lot different than high school for sure,” said Guillen. “It feels good to finally get going.”

Guillen said he is excited for the change of pace the college game will have, as well as the chance to compete with the other quarterbacks.

“It’s going to be to fun to see, going to be fun with nine quarterbacks,” he said. “I just can’t wait to get out there and compete.”

Osterhout and his staff’s training program starts the team with what would be viewed as largely rudimentary exercises, to the likes of even blowing his whistle at unexpected times during a drill to make sure a player is keeping his focus, or re-starting a drill if any individual’s concentration lapses.

Osterhout said that testing the concentration of his players is only the start of mentally preparing a team for the long haul of a season. 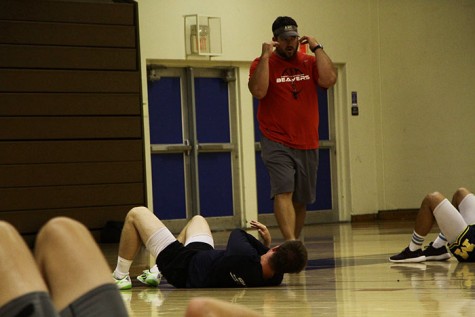 Football head coach Osterhout demonstrates proper exercise techniques to his team as they go through conditioning this summer. Conditioning includes abdominal, trunk and leg strengthening exercises in order maintain health during the season.

Lou Baiz, the team’s defensive coordinator, agreed with Osterhout about setting the discipline early so that the mind is right at all times, even during the physical exertion of the body.

“We lost 10 starters on defense,” Baiz said. “The standards have been set here over the last five or six years, so we’re not going to use youth as an excuse.”

Baiz also pointed out the chemistry of the coaching staff as a reason he thinks the learning process won’t be long for the team.

“A lot of the guys coached together even before working here.”

Baiz was the defensive backs coach in 2014 in addition to his responsibilities as the coordinator, but now has the freedom to roam the defensive sets at every position with the hiring of Kofe.

“It frees me up and gives me a lot of flexibility to look over the defense.”

Training camp runs through the remainder of July, at which point the team will have a 10 day vacation.

The team’s first game will be on the first weekend of September at Modesto Junior College.

Osterhout said his key starting players will probably be named a week or two before that game, which would be either the weekend before the semester begins or the weekend after.

“Everyone’s going to get a chance to showcase their abilities,” said Osterhout. “At the end of the day, they (have to) prove it every week.”

All the returning players and coaches believe they can reach and surpass the progress of last season.

“We’re just excited to build upon what we did in 2014,” Osterhout said.

Be the first to comment on "Football team begins preparation for 2015 season, Osterhout’s second"