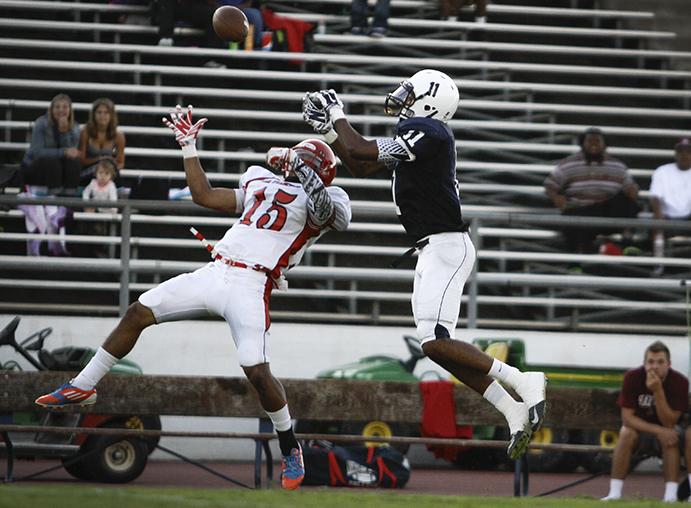 American River College wide receiver Namani Parker goes up against City College of San Francisco defensive back Shalom Luani. CCSF was ranked third in the state prior to its Sept. 27 loss to ARC. (Photo by Emily K. Rabasto)

Running back Deon Ransom ran 71 yards for a touchdown Saturday, helping to lead the American River College football team to a 13-0 shutout over City College of San Francisco.

“I feel good,” Ransom said. “Being a running back, it’s all instinct. Anything that helps the team.”

Defensive back Robert Sanders intercepted the ball twice in the fourth quarter, denying City College of San Francisco the opportunity to make a comeback.

“I put myself in the position to score for the team,” Sanders said.

“The picks by Robert Sanders sealed the deal for us,” head coach Jon Osterhout said.

Osterhout credited the win to the planning of the coaches, particularly the defensive coaches.

“It was a great team win, all across the board,” he said. “I really got to give it up to our coaches, they made a great plan and the players came out and executed.”

“I do feel like I work hard enough to get more reps,” Wilfley said.

Osterhout said that using two quarterbacks allows them to better see how the game is being played.

“We feel real comfortable with both of them,” Osterhout said. “Sometimes it’s nice for the starter to be able to sit back and see what the defense is doing and get a better feel for the game. We feel great with both of them, so why not play both of them?”

Trosin said that the victory was the effort of the whole team, but that there were still improvements needed.

“It feels great. We came out and played a real team game,” Trosin said. “Defense stepped it up and offense made some plays here and there, but we’re still gonna go back to the drawing board and figure some things out.”

The team’s next home game will be on Oct. 4 at 6 p.m. against the College of San Mateo.

Los Rios colleges have “no plans” to give bachelor’s degrees