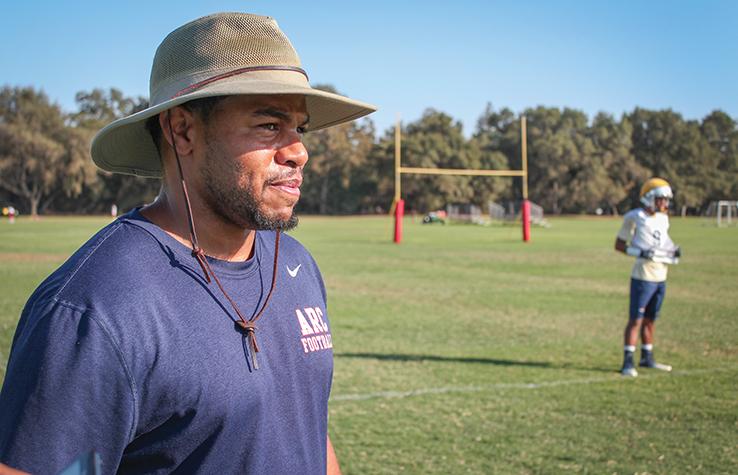 American River College football defensive back coach Chris Marshall used to play as a wide receiver and defensive back for ARC in 2001 and 2002. (Photo by Emily K. Rabasto)

The roar of a crowd, pumping adrenaline, and victorious feeling that goes with playing football is nothing new for American River College’s defensive back coach, and previous player, Chris Marshall.

Marshall played wide receiver and defensive back for ARC in 2001 and 2002 before going to Sac State, where he graduated with a degree in psychology, and Grand Canyon University, where he completed his masters in professional counseling.

His decided to rejoin ARC because of his previous coach Jerry Haflich.

“I have a lot of respect and love for coach Haflich. I enjoyed playing for him as a player and I did a lot of growing up here. So, when he asked if I would be interested, I thought it could be a great step for me to take,” Marshall said. “I figured I would enjoy coaching here, understanding the culture he and his staff had built, and that this would be a great opportunity for me to grow as a coach.”

“Back then, I never expected to be back and to be coaching … it’s a good opportunity to be here and I enjoy being back on campus. It’s changed a lot, and it has put me in a position to help guys (that are) where I once was, get to the next level,” he said.

When coaching his players, Marshall tries to pass on the knowledge he acquired playing college ball and the recruitment process from when he played for ARC.

Marshall says that playing at ARC and developing relationships with people like coach Haflich helped him grow up a lot and that is what he tries to pass along to his players.

“Chris has been an unbelievable resource for us. From a past history standpoint, his knowledge of the game, and his work ethic–he’s been a phenomenal addition to the program,” said head coach Jon Osterhout.

When Marshall is not coaching, he spends his time working at a children’s receiving home as a counselor.

He describes the transition from coach to counselor as tiring, but says that both coaching and counseling are the same.

“Counseling and coaching are pretty much the same. In counseling, you teach people new ways and methods to get the best out of life. In coaching, you are teaching new techniques, and how to focus on things and pay attention to put yourself in the best position to have success.”

While Marshall says he enjoys both coaching and counseling, he admitted to liking football more.

ARC student spent the summer volunteering in the Dominican Republic

Be the first to comment on "Chris Marshall: From player to coach"