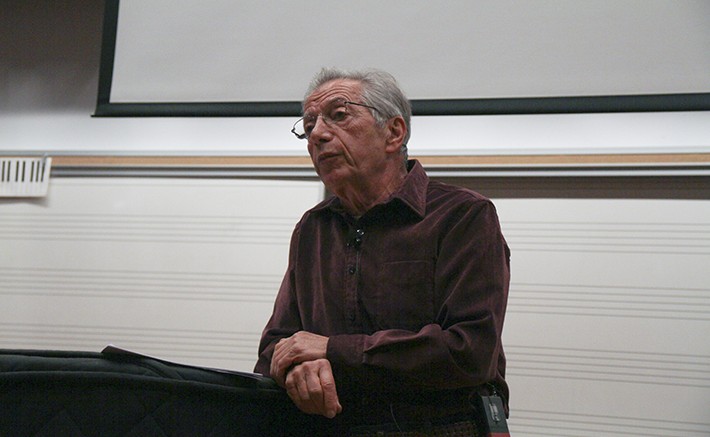 Laurie Jones, the director of legislative affairs for the ASB Student Senate, said that she would have liked to attend the college hour on Tuesday featuring Holocaust survivor Leon Malmed, pictured, but she did not know it was happening. (Photo by John Ferrannini)

Thanks for a great article covering his (Holocaust survivor Leon Malmed’s) talk. Almost like being there, but I wish I had been. Too soon we won’t have any survivors left to come talk. I had requested it, so you’d think they’d let me know. Next time a crucial event like this comes up, would you please ask me before the event or was it after on purpose?

I’m sorry you didn’t include my first response, which was the MUN meeting & a 1:00 honors class. (I was told it was the last MUN meeting to get into the conference in April.)

I have to admit, though, if I had known about the talk, I would have skipped both of them to go. Do you know how it was advertised?

I think it should have at least been announced at a senate meeting & the chancellor’s chat.

I did recently go to 2 community talks on Palestine & Jews in Germany in WWII.

I believe that the student body president used to meet regularly with the college president. I don’t think that is happening now. I’m researching it. Maybe that would help us be more connected.

I also found out about the LRCCD 50th anniversary gala dinner from arcurrent.

Senate donates funds so other schools can attend General Assembly

Letter to the editor: Jeff Gonzales

Be the first to comment on "Letter to the editor: Holocaust event not advertised"