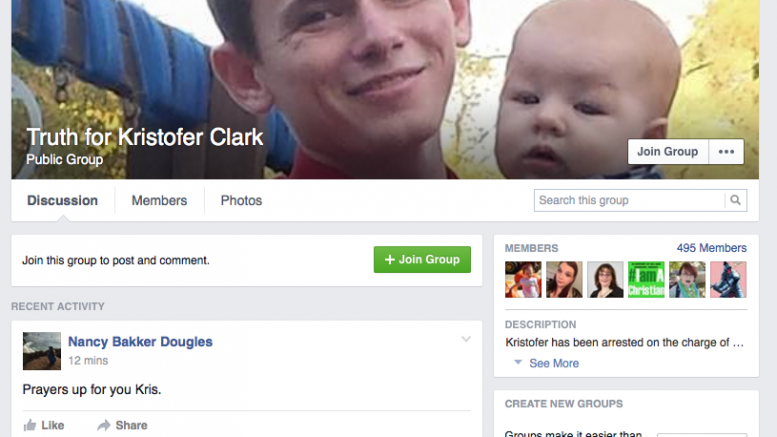 A screenshot of the Facebook group "Truth for Kristofer Clark" shows a message of support for 21-year-old Clark, who was arrested Thursday night. Within three days of news of Clark's arrest, the group has grown to nearly 500 members. (Screen grab via Facebook)

Update: This story has been updated to reflect that the “Truth for Kristofer Clark” Facebook group has grown to nearly 500 members as of Monday night.

A Facebook group titled “Truth for Kristofer Clark” had nearly 500 members Monday, just days after news spread of the arrest of 21-year-old Kristofer Clark. Posts on the public page are an array of pictures and messages of support for Clark, who is scheduled to be arraigned Tuesday.

Clark said that he was accused of saying to a woman he was hugging that the school was going to “be blown up.” He was arrested at approximately 6:10 p.m. Thursday at his job at the McDonalds on Fair Oaks Boulevard, about three miles from the ARC campus.

In a jailhouse interview with ABC10, Clark said that he wasn’t given any information about the accusations, and hopes that his arrest was a misunderstanding.

Clark’s mother, Holly Clark, posted an update on the Facebook page Saturday night, thanking supporters and detailing her misgivings about the case.

“We would like to thank everyone for their support. Words can’t possibly explain what we are going through. Anyone who knows Kristofer knows the accusation against him is false. Kris is a lover and doesn’t have violence in him,” the post read. “Kris is extremely scared right now. We all believe he is being used as an example. … Stories aren’t lining up. The only consistent thing we have heard is there doesn’t seem to be much if any proof of the claim yet they jailed him in general population in Sacramento county jail and he doesn’t even see a judge until Tuesday.”

Mrs. Clark went on to express frustration with the limited information she’s been given about the case.

“This is not justice. This is horrendous. This was all done by one person claiming to hear something. This accusation could be made about any one of us and this is an example of what our system does,” Mrs. Clark wrote. “He is my son and a good person. No parent could imagine this happening to their child. He has no record, not even a ticket. He’s never been in trouble a day in his life and he’s now damaged and scared beyond belief.”

ARC student Kyle Joyce said that whoever reported Clark must not have known him well.

“He would never really do it, he just doesn’t think before speaking a lot,” said Joyce. “It’s just how he is. If you ever needed help, you went to him. If he told someone that, he might have been angry, but no threat.

“I stand by this man and his good character.”

On the other hand, ARC student Kyra Pigford said that when she found out Clark had been arrested for making threats, she was “not surprised.”

“I was like ‘there’s something very off about this person.’ You can just kind of tell,” said Pigford. “Honestly, just being around him and experiencing him around other people, I’m not surprised.”

Pigford said that Clark often joked about sexual assault and “would say random things just to get attention.”

“The way you make friends is not by saying stuff like ‘I’m going to rape you,’” said Pigford. “I don’t know if he needs guidance or mental health or if it’s his personality, but that’s no way to act in public.”

Josh Lowy said he worked with Joyce at Camp Winthers, a summer camp northwest of Lake Tahoe. Lowy said that Clark might have been bullied because he is gay.

“He definitely had the persona which people would maybe bully him for,” Lowy said.

Trial of Travis and Nettie Reay: The expert witness speaks out