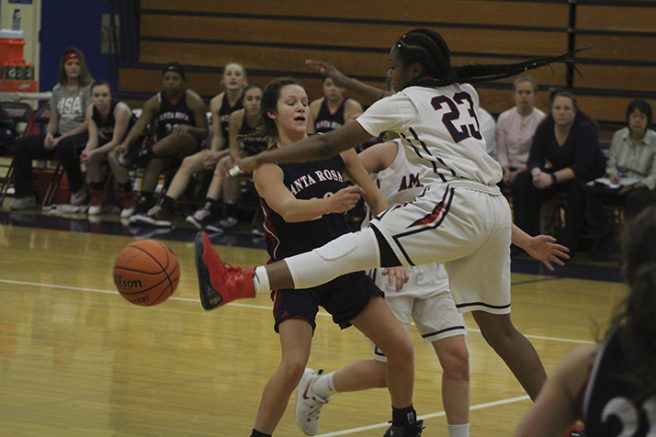 American River College guard Alana Myers blocks a pass during a game against Santa Rosa Junior College on Jan. 27. The Beavers picked up their 15th win of the season 62-44. (Photo by Mack Ervin III)

The team kept SRJC to zero points the entire first half. This was with the work of strong defense and the desire to keep their opponents from scoring.

Although the current team roster is new, with eight out of its 13 players freshmen, the lack of experience at the college level did not show Friday night.

The team’s assistant coach Caresse Williams said she was very proud of her team.

“I feel really, really good about [our win],” she said. “We dictated how the game was going to go.”

The women led by 20 points every quarter except in the fourth. This shows that they dominated not only defensively, but offensively.

Sophomore starting center Kimberly Schupp praised her teammate’s efforts.“I’m very proud of the team. We worked hard and our defense was on point,” she said. 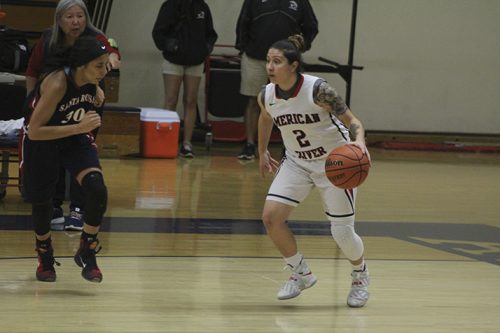 Atik also offered some perspective on the game, “It’s a good confidence boost but it will be good to watch film to see some of the mistakes we made, but also some of the strong suits we need to carry on,” she said.

Although the women stayed in the lead, the teammates agreed that defense was a big asset during the game for them on Friday night.

The women’s team is currently 6-2 in conference play and this win “is a great start to the rest of the season,” Williams said.