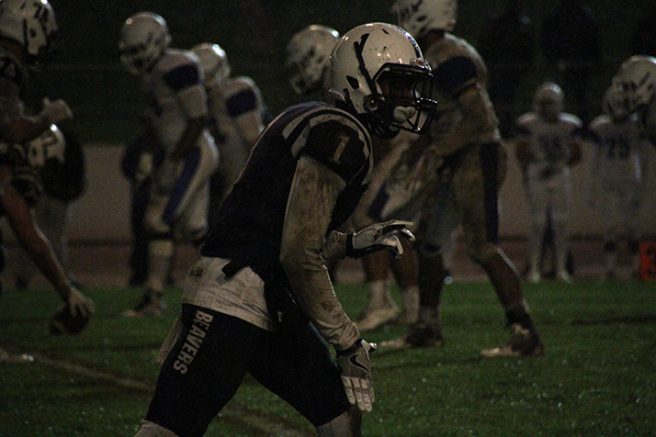 American River College wide receiver Torian Williams prepares to run a route during a playoff game against Modesto Junior College on Nov. 19, 2016 at ARC. ARC won 27-21 and will face Butte College in the NorCal Championship on Saturday. (Photo by Mack Ervin III)

The football team advanced to the regional finals the Community College football playoff by beating Modesto Junior College in the North State Bowl on Saturday in Modesto.

“We have unfinished business,” Coach Jon Osterhout said after the Beavers close playoff win against the Pirates.

The beavers started off the game down early, but like they have done all season they came back and ultimately won the game 27-21.

In the Beavers first possession, they drove down the field, managing to get in the redzone, but Quarterback Griffin Dahn threw an endzone interception and stymied the beavers offense.

Modesto college took advantage of Dahn’s interception in the endzone with a big 78 yard touchdown from Modesto Junior College, making the game 6-0 with Modesto college missing the ensuing extra point.

The very next drive for Modesto college ended again with a big 53-yard run from running back Jay Green, putting Modesto in the driver’s seat at the end of the first quarter with the score being 14-0.

Dahn talked about how the team as a whole did not put their head downs and lose hope, but instead rallied together.

“Our coaching staff all season said that we cannot flinch when things start going bad, and to our team’s credit we didn’t,” Dahn said.

To begin the second quarter, the Beavers drove down the field with precision and ended with a 25-yard touchdown from Dahn to sophomore wide-receiver Namani Parker, turing the momentum the Beavers way.

Defensively in the second quarter the Beavers did not allow modesto to get the same rhythm they had all of the first quarter.

“We had a couple of mistakes in the first quarter, but coach has preached all season next play best play and that is the mentality we have a defense,” said Rahsaan York, linebacker.

Near the end of the second quarter, the Beavers put together another scoring drive with a 25-yard run from freshman running back Dante Davis, tying the game at 14-14.

At the start of the second half, sophomore wide-receiver, Damen Wheeler Jr., returned a kickoff for 91 yards, giving the beavers a 21-14 lead.

Modesto also scored on their first drive of the third quarter with a 26 yard touchdown pass, tieing the game at 21-21.

The beavers on the next drive managed to go down the field with ease and the drive ended with a two yard run from Dahn, putting the beavers back in the lead 27-21 after Kicker Max O’Rourke missed the extra point.

With the win, the Beavers move on to the regional championship round where they will face Butte College in a rematch. The last time the Beavers played Butte they lost a nailbiter in double overtime 21-14.

Coach Osterhout said after the game that the Beavers are ready and excited to play against Butte again.

“We’re excited for a rematch with a tremendous football program in Butte,” Osterhout said. “We’re gonna stick to our program and go through that film again and see what we have to do to improve and get us the chance to play in the state championship game.”

American River plays at Butte in the Northern California Football Conference Championship this Saturday at noon. A win will put the Beavers in the state championship.

ARC professor puts his mark on the Art Hotel

Be the first to comment on "Football team advances to regional championship."