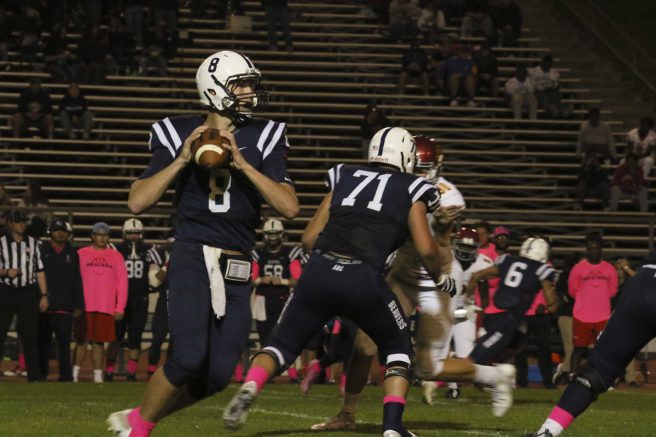 Quarterback Griffin Dahn drops back for a pass during the Beavers 17-7 victory over Sacramneto City College on Oct. 22. (Photo by Laodicea Broadway)

Offense was hard to come by in ARC’s sloppy 17-7 win over crosstown rival Sacramento City College.

Both teams struggled in the first half and the game went into halftime scoreless. Out of the half, the Beavers broke through and scored two touchdowns to seal the win.

Last week’s theme of gritty play poured over into this week as ARC end the game with 16 penalties on 196 total yards of offense.

Coach Osterhout said that any win is a win and feels “unbelievable” going into the next game.

“Wins are hard to come by especially against a local team down the street,” Osterhout said.

Quarterback Griffin Dahn commented on why the offense as a whole had a tough time getting the offense going in the first half.

“We were not being a smart football team, and when you’re playing a team like Sacramento City, if you make mistakes like we did it is very tough to score,” Dahn said.

The defense was stout and only allowed Sac City to gain 200 yards.

Freshmen linebacker Rahsaan York, who lead the team in with 10 tackles, described how the defense prepares each week.

“We had a good week of preparation and we practice hard every day,” York said. “Coach Osterhout prepares us week in and week out preparing us on how to attack each offense we play, and today was no different we came out hard and ready to execute.”

A 27 yard field goal by freshman kicker Max O’Rourke with a minute left in the third quarter gave the Beavers a 10 point lead against Sacramento City going into the 4th quarter.

The 4th quarter started and the beavers came out and managed to score another touchdown from a 17 yard touchdown pass from Griffin Dahn to Sophomore Wide receiver Dalecio Calloway, making the score 17-0.

The Panthers scored a touchdown on a 8-yard run from Tyree Hanson on the next play giving them life in the second half.

With 3 minutes left to play Sac City had the ball and felt they had some momentum going for them, but it was short lived as sophomore Damen Wheeler Jr. Intercepted the ball, putting the final nail in the coffin for Sacramento City College’s chance at a comeback.

Wheeler Jr. commented on what he saw on the play that sealed the victory for the Beavers.

“They (Sacramento City College) did not have a receiver to my side so I basically was free to roam around on the field, he threw it and I ran up and got it.”

Despite the late surge from Sacramento City College the beavers throughout the game came out slow in the beginning and managed to find their rhythm in the end.

Dahn talked about that this kind of game reflects how the beavers are as a team.

“I think it is like all year, we are a resilient team we trust each other, we trust what the coaches are saying, and we trust we can get the job done no matter the score.”

The Beavers next game will take them to Quincy this saturday to take on the 0-7 Feather River College.