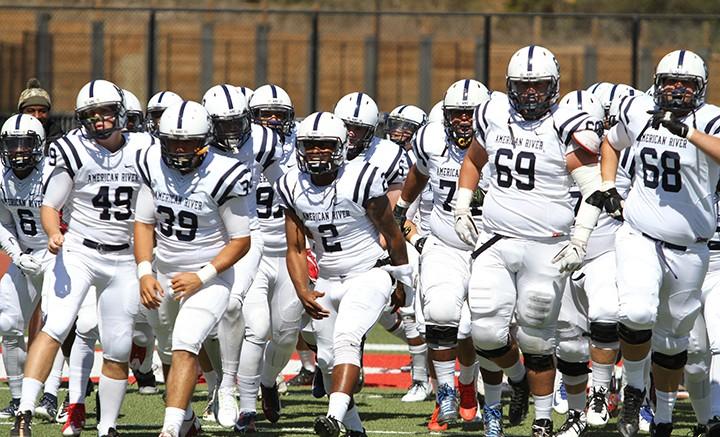 American River College's football team rushes on to the field at City College of San Francisco before its 20-17 win over CCSF on Sept. 26. ARC is 3-2 after a 42-10 loss at the College of San Mateo on Oct. 3 and will play College of Siskiyous for first place in the National NorCal conference. (Photo by Barbara Harvey)

Five weeks into the 2015 season, American River College’s football team is 3-2, and it is coming off a 42-10 loss at College of San Mateo College where it gave up 298 yards rushing and fumbled the ball four times.

After losing to CSM last week, ARC is now tied with College of the Siskiyous for first place in the NorCal national Conference.

COS, who is also 3-2 on the season, will be coming off a bye after defeating Foothill College on the road 40-7.

In its last two games, COS has run for a combined 707 yards rushing in victories over Foothill and Diablo Valley College.

Foothill freshman running back Lashone Garnett is coming off a 171 yard, two touchdown performance against Foothill after running for 274 yards and three touchdowns in a win over DVC.

Garnett has rushed for more than 100 yards in all but one of COS’s wins.

In both of ARC’s losses, it has allowed over 200 yards rushing and COS comes into this game running for 212.6 yards rushing.

“Players have to go out and execute and respond,” said ARC head coach Jon Osterhout after the loss to CSM. “We’re going to be just fine. We’ve been down this road before.” 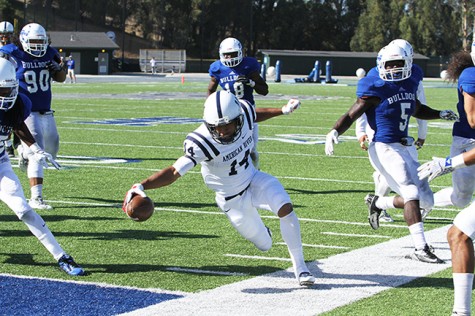 American River College wide receiver Daliceo Calloway steps out of bounds while attempting a run into the endzone during ARC football’s 42-10 loss to College of San Mateo on Saturday, Oct. 3, 2015. (photo by Barbara Harvey)

ARC to stay in division the rest of the regular season

ARC’s next game against COS will mark the team’s first conference game of the season, as the first five were all played outside of the national division.

Until this point in the season, none of the six teams in the conference have played one another.

Last season, ARC went 4-1 in its conference with its only loss being a 31-28 at home against Butte.

With the exception of its 20-17 win over City College of San Francisco, all of ARC’s games have either been blowout losses or blowout wins.

In both of the losses, starting quarterback Jihad Vercher was pulled from the game in favor of freshman Chris Guillen.

Vercher has thrown interceptions in both of these losses, one against Modesto and two against College of San Mateo, and has also completed less than 60 percent of his passes.

Against Modesto, ARC gave up 212 yards rushing and 298 against San Mateo.

In ARC’s wins, Vercher has thrown for a combined 9 touchdowns and 768 yards with no interceptions.

ARC has gotten out to hot starts in each of its blowout wins, gaining large leads in the first halves of these games.