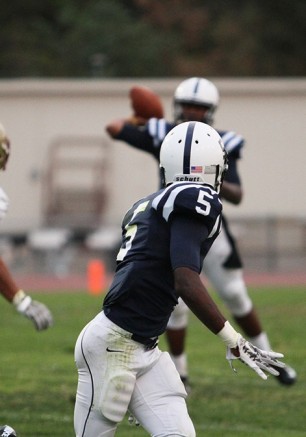 American River College’s offense found the end zone five times in its 38-2 victory over De Anza College in its home opener. The offense also racked up 390 total yards of offense, 189 of which came on the ground.

“The O-line played exceptional in regards to opening holes for De Anza,” said ARC head coach Jon Osterhout. “We put a lot on our O-line to carry our football program.”

Quarterback Jihad Vercher said that last week’s 41-10 loss to Modesto Junior College motivated the team to do better this week.

“It turned the switch on,” said Vercher. “It made us realize you’re not guaranteed anything. You got to earn everything.”

Less than three minutes into the game, quarterback Jihad Vercher hit wide receiver Jonathan Lopez for a 26 yard touchdown to give ARC a 7-0 lead.

Vercher added that nothing changed in practice after last week’s loss at Modesto Junior College.

“Nothing changed as far as practice wise, we just had a different mindset,” said Vercher.

Osterhout said the team sticks to its process.

“There’s a standard with how we play, how we practice, how we train in the weight room. We just screwed things down tighter and it showed on the scoreboard,” he said.

Doug Grush, the team’s offensive coordinator, agreed with that assessment.

“Guys were teed off about losing last week and we had a good week of practice,” said Grush. “De Anza put more pressure than people expected, but our guys didn’t flinch.”

Late in the first quarter, Vercher threw a shovel pass to running back Armand Shyne for a 43 yard touchdown.

Shyne rushed for an 11 yard touchdown near the end of the first half, which gave ARC a 31-0 lead going into the half.

The final touchdown of the night was also scored by Shyne, running for 55 yards with 6:08 left in the third quarter.

Shyne also credited the offensive line for giving him the opportunity to score.

“(The line) opened it, I read it,” said Shyne. “I just want to thank my linemen. That’s all really.”

Offensive line coach Josh Crabtree said that the players are getting better with timing and practice, but warned against becoming too confident.

“They’re learning that what was good enough in 12th grade isn’t good enough on the junior college level,” said Crabtree.

“These kids didn’t think they could practice at the level we are now. But what we do now, in week two, doesn’t have anything to do with week eleven,” he continued.