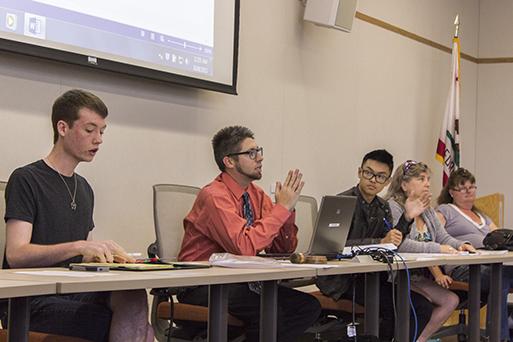 The Associated Student Body Student Senate deliberates on a proposed recall of Los Rios Trustee Cameron Weaver at Thursday's meeting. After the resignations of Garrett Kegel and Sam Kinsey, Justin Nicholson, far left, is the only member of the board actually elected by the students. (Photo by Karen Reay)

A previous version of this editorial falsely stated that only one member of the Associated Student Body Student Senate, CAEB President Justin Nicholson, was elected by the students. In fact, Sen. McKaela Broitman was also elected during last spring’s election.

When only two members of the Associated Student Body Student Senate were elected by the students, it’s no wonder that student government members don’t feel accountable to anyone but themselves.

Clubs and Events Board President Justin Nicholson and Sen. McKaela Broitman were the only members of Student Senate who were elected to their positions in last spring’s election. All the rest, a total of eight positions, have been appointed by other senators.

This should come as no surprise. ASB’s notoriety comes from members making jokes about the deaths of transgender people, being kicked out of conferences for drugged or drunken behavior and spending hundreds of dollars on giving awards to itself.

David Hylton, the acting president following the resignation of Garrett Kegel, was appointed Director of Finance after losing the election for the presidency in April. He has stated that there will not be a special election held for the students to elect a permanent president.

Hylton said that the ASB Constitution does not allow for a special election, yet according to Article 13, section three, a vacant position may be filled via a special election if the position was vacated in one of eight ways, one of which is resignation.

“Anyone who can support someone who doesn’t know if the largest hate crime in human history actually happened has no right to call themselves a defender of equality.”

The rules for running for ASB office are so cumbersome that they restrict the spirit of a free democracy.

In order to run for student senate president, according to the bylaws, a student must have been on ASB for one year prior. This makes it next to impossible for students at a two-year college to become president within two years.

Candidates are not allowed to campaign in specific places or even discuss their campaign before certain deadlines.

Hylton assumed the presidency after the unexpected resignations of Garrett Kegel and Sam Kinsey. Kegel, who was elected by the students, said that “the administration has ‘processed’ me out of the role of president.”

Kegel said that he wasn’t accommodated for his generalized anxiety disorder.

He said he resigned because he “felt that there was no other option” and that he was told that to join the board again he had to be appointed.

“I asked my adviser Juan Blanco to help accommodate for my disability, yet I did not receive much help,” said Kegel in an email to the Current. “I am a victim of process and procedure, something that the ARC administration uses to block the view of all the bright, optimistic faces of the student body. We are not students to them … They do not care about us.”

Kegel is the second person elected ASB Student Senate president in two years to claim that the student’s voices were stifled when they were not allowed to serve as president.

Jorge Riley’s election in April 2014 was invalidated with no reason given by the ASB or the administration.

While those groups cited the Family Educational Rights and Privacy Act, a lawyer with the Student Press Law Center consulted by the Current said that this was not an adequate justification to keep the reason secret.

All of this is not to mention the hypocrisy of members of a board that claims to fight for equality and acceptance but continues to defend comments from Los Rios Student Trustee Cameron Weaver questioning whether the Holocaust actually occurred.

“I think as (Weaver’s) home school, our position would be more of support until we hear something that we totally disagree with,” said Director of Legislative Affairs Laurie Jones.

Hylton also questioned how many people died during the Holocaust.

Anyone who can support someone who doesn’t know if the largest hate crime in human history actually happened has no right to call themselves a defender of equality.

The students have to contact these supposed representatives. They have to vote and follow up at the weekly meetings to make sure that they are heard.

Otherwise there is no alternative to ridiculous rules, inane ego games, hypocrisy and a culture that can’t be bothered to take this school seriously.

Be the first to comment on "Editorial: ‘Student voice’ is no longer the voice of the students"