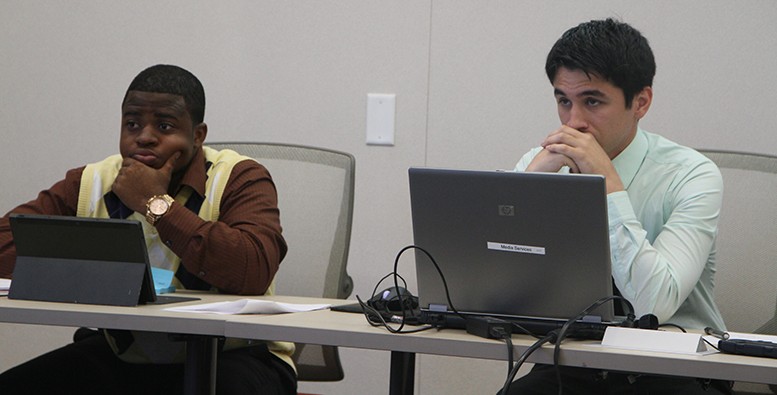 By John Ferrannini and Jordan Schauberger

Former Associated Student Body Student Senate President Garrett Kegel sent an email to the Current Friday in which he made serious allegations against the American River College administration and ASB adviser Juan Miguel Blanco while discussing the reasons for his resignation.

Kegel said that he resigned due to medical reasons relating to an anxiety disorder and was not allowed to go on medical leave, leading him to feel he had no choice but to resign.

“I felt that there was no other option,” said Kegel in the email. “I asked my adviser Juan Blanco to help accommodate for my disability, yet I did not receive much help.” (The text of the full email is available at the bottom of this story)

Kegel said that shortly after his resignation, he wanted to retract his decision but was told by the Center for Leadership and Development that he could not do that.

“The Center for Leadership and Development refused, due to accreditation being so close,” said Kegel in the email. “I received no amnesty. No forgiveness. I didn’t even get a day to think about resigning, to calm down and attempt to cope with my anxiety.”

Kegel went on to say that the administration “do(es) not care about us.”

“I am a victim of process and procedure, something that the ARC administration uses to block the view of all the bright, optimistic faces of the student body,” said Kegel in the email. “We are not students to them, we are ‘transients.’ We are just passing through. They do not care about us. They only care about processing us through.

“I do not want to be on campus anymore if we, as students, cannot even trust the paid district officials who are supposed to promote our growth as students.”

Kegel is the second person elected ASB Student Senate president in the past year to claim that they were not allowed to serve in that capacity because of roadblocks set by the school administration.

Jorge Riley, who was elected ASB Student Senate president in the Spring 2014 election over Tamara Dunning by a margin of 62 votes, but whose election was invalidated for reasons the administration and the ASB have not disclosed, said that he agreed with Kegel’s assessment of the administration.

“The only people they want in office are the people who are going to agree with everything,” said Riley. “They should shut the whole thing down. There’s no real representation.”

Blanco said that he could not confirm or deny whether Kegel asked for accommodations, citing the federal Family Educational Rights and Privacy Act (FERPA).

Blanco also said he could neither confirm or deny whether he gave any accommodations to Kegel.

Blanco said that Kegel did not ask him to go on medical leave. He also contested Kegel’s assertion that the school holds students back from learning to be leaders.

“That’s my role as student life supervisor,” said Blanco. “It’s not my responsibility to impose ideas.”

Manuel Perez, the dean who oversees ASB, said that Kegel or Blanco never discussed the possibility of Kegel going on medical leave with him.

Perez strongly contested the idea that the administration would not let Kegel back on the board because of next week’s visit from the committee responsible for accrediting the college.

“At no point did accreditation play a role in this nor would it ever be a reason we would encourage or hinder a student,” said Perez. “Accreditation was never a part of the dialogue.”

Perez confirmed Kegel’s assertion that Kegel would only be allowed back on to the board if he was appointed by them.

Perez told a reporter from the Current that he would be forwarding Kegel’s complaints about how his situation was handled to the appropriate channels.

Scott Crow, the ARC public information officer, said that there are avenues for students who feel discriminated against.

“He uses ‘processes’ in quotes, but whenever there’s a situation like this, you get it to the proper people,” said Crow. “I’d encourage students to start with their professors first. If professors don’t know, go to one of the vice presidents.”

Crow said that there are different administrators who handle complaints such as discipline and sexual harassment.

Crow also said that he didn’t feel the remarks were aimed at the whole administration.

“I think a lot of people use the term ‘administration’ in a global sense,” said Crow.

Acting Student Senate President David Hylton, who was censured by the Senate in April after admitting to a drug offense committed while at the state General Assembly for the Student Senate for California Community Colleges in Los Angeles, said that he cannot comment on Kegel’s allegations at this time.

“I haven’t read the whole thing so I can’t say anything about that,” said Hylton. “What I can say is that I did see Dean Perez, Justin (Nicholson), and (Kegel) sitting in his office before our (Student Senate) meeting. I don’t know what transpired. I have no idea.

“I just know … that when I was sitting here Garrett came to me and closed the door and told me that him and Sam were both resigning and that I was going to be president … he did seem kind of upset.”

Director of Administrative Services Dan McKechnie was accused in the email by Kegel of referring to ARC students as “transients” at Buildings, Grounds and Safety Committee (BGSC) meetings.

McKechnie said that those allegations were false.

“As the chairman of that committee I can’t remember a single instance where any student or student group was disparaged in any form or fashion by anyone,” said McKechnie.

Laurie Jones, who sits on the committee, agreed that McKechnie had never used the term but said that she has heard students referred to that way.

“In a BGSC meeting last year, in discussing the tobacco issue, either a faculty or staff person said that the faculty and staff are around longer. I was trying to have the committee wait to make a recommendation until we had more student input,” said Jones. “Our input was not as valuable because we are only here fleetingly.

“I was shocked … We are the purpose of this institution.”

Sam Kinsey, who served as vice president of the Student Senate until his resignation Wednesday, has not returned an email as of press time.

Below is the complete text of Kegel’s letter:

My resignation was a mix up. When I wrote my resignation letter, I felt that there was no other option. I have been dealing with medical issues and I wanted medical leave. Also, I have a documented disability which is Generalized Anxiety Disorder. I asked my adviser Juan Blanco to help accommodate for my disability, yet I did not receive much help. I received emails from Adviser Blanco with suggestions to make meetings more efficient, but that was pretty much it. If you noticed, Adviser Blanco was very active in Hylton’s first meeting. In all the meetings preceding Hylton’s, he never sat next to me nor did he even attempt to help me during student senate meetings.

This is, unfortunately, another example of the ARC administration overlooking student needs. I wanted to be a student leader, yet I feel robbed of that opportunity due to my disability. I don’t think any student should feel like their school administration is actually holding them from learning a skill, such as leadership. I feel torn on the inside and my self esteem is actually lower because of this whole ordeal. I wanted to serve the students in this leadership role, yet a leader cannot do it alone. I had to lead a school of 30,000 students alone, with minimal support from my adviser.

I asked if I could remain as president, even through this whole mix up. The Center for Leadership and Development refused, due to accreditation being so close and needing a president to serve right now. I received no amnesty. No forgiveness. I didn’t even get a day to think about resigning, to calm down and attempt to cope with my anxiety. They moved forward with the process in a hurry. Yet, I was ready to serve. And the CL&D suggested that I turn in a new appointment packet to join either Senate or CAEB. This was insulting and hurt me deeply. I was elected by students to serve students, but the administration has “processed” me out of the role of president. I am a victim of process and procedure, something that the ARC administration uses to block the view of all the bright, optimistic faces of the student body. We are not students to them, we are “transients”. We are just passing through. They do not care about us. They only care about processing us through. Ask Laurie Jones for a statement about how Chair McKechnie believes that students are “transients” and uses this term loosely during the Building, Grounds, and Safety Committee meetings.

I am at UC Davis now and I can see that the UC Davis administration is much friendlier and really cares about their student population. As president of senate, I really wanted to import some of the great things I’ve seen on the Davis campus to ARC’s campus, including a LGBTQ center, where students can feel safe from any kind of discrimination and just be themselves. UC Davis has this on their campus, shouldn’t we also?

Ultimately, I want justice. I was elected on the platform that I would seek to undo any injustice that I could find. As you can see, all of this has hurt me as a student. I do not want to be on campus anymore if we, as students, cannot even trust the paid district officials who are supposed to promote our growth as students. I feel that my leadership growth has halted and I’m just not sure what’s next for me.

I wonder if the CL&D has done this to any other students?

Be the first to comment on "ASB President on resignation: “They do not care about us”"