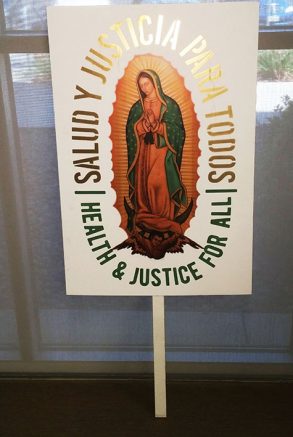 A poster displayed at the September 21, 2017 Coalition for Undocumented Students and Allies meeting. (Photo by John Ennis)

At the September 21 Coalition of Undocumented Students and Allies meeting, members discussed a proposal to create a “Dreamer center” to provide resources for undocumented students and recipients of the Deferred Action for Childhood Arrivals program as the program comes to an end.

American River College student Nicolai Babasa asked about creating such a center at the Student Senate meeting shortly before CUSA’s meeting and Senator Lidia Lara, who proposed the center, offered to help write a resolution for it.

The goal would be to open up a center on campus similar to the AB540 and Undocumented Student Center at UC Davis, which “empowers students to attain educational goals, overcome legal and financial obstacles and achieve their long-term dreams,” according to its website, undocumented.ucdavis.edu.

Assembly Bill 540 is a law that exempts some students from paying non-resident tuition fees if they’ve attended a California high school for at least three years, graduated from high school, received a General Education Diploma or passed the California High School Proficiency Exam.

While a center for undocumented students is still in the discussion phase, papers with free legal resources were provided at the meeting.

Another from the Meyer Law Office in Denver, Colorado offers tips on how DACA recipients can protect themselves from questions about their immigration status, requests to search by law enforcement and what to do if arrested.

Because Lara is a subordinate to Hernandez in Student Senate, she can’t have any influence over the decisions CUSA makes regarding lobbying the board.

“I have to be neutral in this and I’m actually thinking of stepping out so there’s no conflict of interest here. As president of Student Senate, I can’t have any influence over the senator [Lara] or over you guys,” Hernandez said.

CUSA is planning on submitting agenda action forms to discuss a Dreamer center during the next Student Senate meeting and to have members speak at the meeting during the public comment portion.

“You can either be at the meeting or set up an agenda action form from the Center for Leadership and Development,” CUSA President Juan Maciel Montoya said.

Agenda action forms can be filled out in the CL & D to bring up topics during Student Senate meetings.

“Come in with ideas, what you’ve seen and what you want,” Lara said.

Student Senate meetings are held at 10:30 a.m. on Thursday in the Student Center Boardroom.