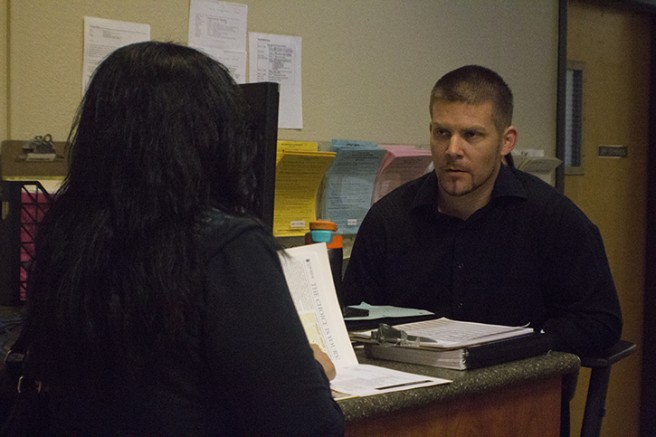 Joe Rust, right, talks with a student in the transfer center on Tuesday, March 1, 2016. Rust is also a full-time counselor for the college. (Photo by Allante Morris)

Rust will be taking over for Rick Ramirez, who will now be the co-faculty mentor coordinator.

In addition to his new duties as the director of the transfer center, Rust will continue as a full-time counselor and learning disabilities specialist.

The transfer center’s purpose is to help students connect with a counselor, choose a major and identify a transfer institution.

Rust was a former educator and taught Human Career Developments courses for the last eight years at ARC.

Rust said he has many ideas for the transfer center.

”I plan on improving our website and meeting with representatives and becoming more automated, offering video tutorials on how to transfer and things as such,” Rust said when asked what these ideas were and how he planned on implementing them.

Rust plans to start early in regards to speaking with high school students who don’t believe they have the potential to go straight to a four-year university or make it past community college.

He said he wants to speak with them about how he was just like them at one point and to see where he’s gone since.

The transfer center is located in the counseling office. It offers online resources on various four-year institutions throughout California and the U.S.

“I’m excited that (he) wants to take us from number 17 out of 114  schools whose students actually transfer to number 1 on that list,” Mayer said.

Rust mentioned his goal is always to raise numbers and to be more hands-on as well as working more closely with programs.

Rust said he plans to promote and spread awareness about the school’s transfer center and how he and the center’s goal is to help students move forward.

Dora Vasquez, who plans to graduate this spring and transfer to Sacramento State University in the fall, liked Rust’s proposals on helping students.

”I believe the idea on tutorials would really help a lot of people who don’t know much on transferring or where to start, so I think it’s a great idea,” Vasquez said.