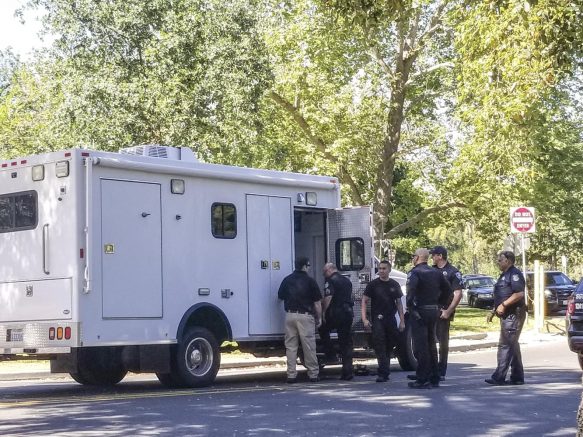 Members of the Sacramento County Sheriff's Explosive Ordinance Detail enter their vehicle on May 5, 2018. The officers were dispatched to William Land Park after reports of an object that appeared to be a pipe bomb. The suspicious metal rod was found to be safe after the EOD Unit took X-rays. (Photo by Luis Gael Jimenez)

Suspicions of a pipe bomb placed at William Land Park caused district officials to send out a Rave Alert warning students to avoid the area on Wednesday.

The alert, which went out at 9:06 a.m, urged students and faculty to avoid the area around the park until “further notice” due to “emergency police activity.”

Sacramento County Sheriff’s officers and Sacramento Police Department (SPD) officers were dispatched to the park after to sightings of a suspicious metal rod that appeared to look like a pipe bomb, according to Sergeant Kirtlan of the SPD.

Police cordoned off a section of Park Road near Sacramento City College as the bomb unit prepared to dispatch an unmanned drone to investigate the suspicious steel rod.

The drone was dispatched by the sheriff’s Explosive Ordinance Detail (EOD) at approximately 9:52 a.m.

A member of the EOD unit wearing protective then approached the package and began x-raying it when the drone was unable to prove conclusively whether the object was a bomb.

“We weren’t able to tell right away [if it was an explosive], so we went out and x-rayed it. If it’s filled with nails or marbles, we know it’s an explosive,” Kirtlan said, adding that, in this case, it was “100 percent safe.”

The Rave Alert was lifted at 10:08 a.m. when law enforcement officials determined the rod was not a bomb.

“It looked like a pipe bomb. Somebody had used it as a stand — they had something welded onto it and it fell off — and it got left behind,” Kirtlan said. “It’s better to be safe than sorry.”

Be the first to comment on "Breaking News: Suspicions of bomb in Land Park prompt Rave Alert"