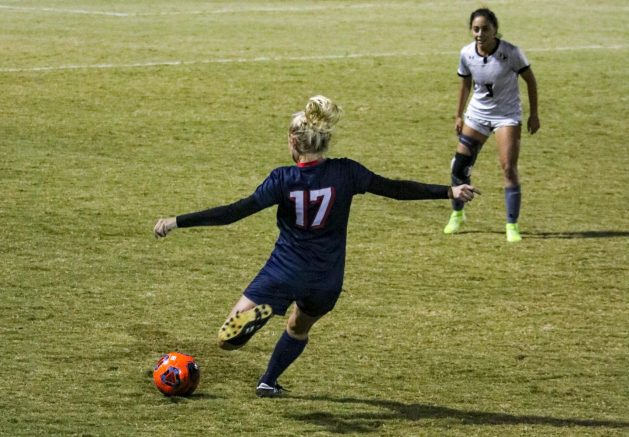 Before the game started, there was a small ceremony congratulating the women who are leaving ARC, hosted by families and team members.

This game was like a clash of warriors, as both sides were playing to the absolute best of their abilities, with no goals actually finishing for the first 85 minutes of the game.  Both sides crashed into each other as a means of goal prevention.

Head coach Paul Arellanes said he was happy with his teams performance against Delta. He was also happy with the growth of his team for the season.

“We left everything on the field. We did all we could and it’s a good team, so sometimes they find a way to win it and we had a couple chances to goal up because [in] a game like this, you gotta take your chances and then you gotta hold on and that’s the way you win,” Arellanes said.  “It wasn’t our win but it doesn’t take away from the fact [of] how hard we ran, how hard we fought, the battle and the mental toughness. So I’m proud of the girls.”

Avonlea Oglesby, 2018-19 defense player alumni, said she was also impressed with the growth of the team, as previously they lost to Delta, 0-6.

“Compared to our last game against them, this one was so much better, but it was definitely a nail biter for sure,” Oglesby said.

A common complaint from the crowd and both teams’ coaches was the referees’ reluctance to card players on both sides for aggressive plays.

“I think he could’ve called a few more calls against the violence against our team a few times, but overall he did an okay job,” Oglesby said.

Oglesby said she was very happy with her teams performance and ferocity, with teamwork being a main component of the game.

“This team worked together very well. We could’ve finished a few times, but I think overall teamwork and chemistry was really strong this game,” Oglesby said.

Arellanes said he was also proud of the season so far. He was also understanding on the result of the game.

“They did what anyone would ask them to, sometimes the ball goes in, sometimes it doesn’t,” Arellanes said.

Oglesby has a positive outlook on how the remaining games will go.

“We are in a good place to have some successes for the rest of the season,” Oglesby said.